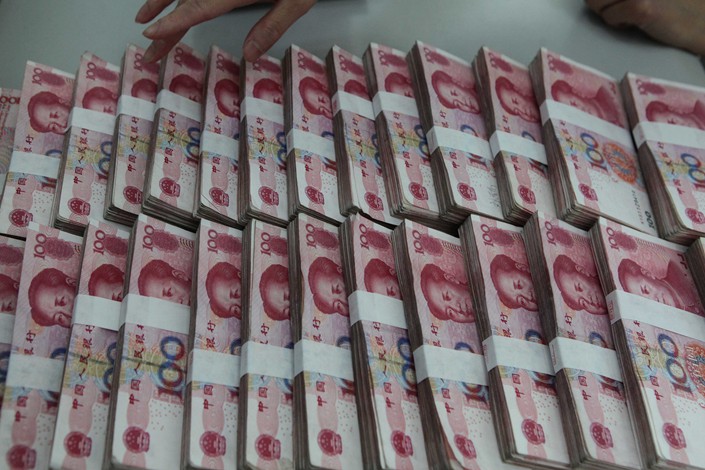 Banks in Shandong, an industrial powerhouse in eastern China, offloaded more than 220 billion yuan ($32.8 billion) of soured assets from their balance sheets over the course of 2018, 18% more than in 2017, the provincial government noted in a report published earlier this week.

The report said pressure remained relatively large and the authority pledged greater efforts to rein in risks in the financial system this year by setting up mechanisms to monitor risks and corporate financial strength, cracking down on illegal fundraising and improving credit support for small business.

“Challenges will mainly come from two aspects: the first is persistent pressure to control risks that are exposed during the economic downturn such as corporate liquidity pressure, bond default and risks related to listed firms, local financial institutions, illegal financing and internet finance,” the report said. “Risk control remains an arduous task in some sectors and regions. The second is obstacles blocking capital from getting through into the real economy, due to imbalances in the financing structure, and (funding difficulties for) private businesses, the agricultural sector, small and micro businesses, and startups.”

Shandong province, which has the country’s third-highest gross domestic product, also has one of the biggest bad-debt problems, partly due to its size and industrial base — it is home to many large state-owned enterprises including the world’s biggest aluminum producer, China Hongqiao Group Ltd. — but also due to the proliferation of private companies located in the region. Some of the biggest enterprises include Weiqiao Textile Co. Ltd., the world’s largest textile mill, Shandong Dahai Group, an import-export group, and Shandong SNTON Group, a steel cord manufacturer.

At the end of September 2018, total non-performing loans (NPLs) in Shandong’s banking sector, which includes local banks and the branches of lenders based outside the province, had surged by 44.5% to 263.1 billion yuan from the beginning of the year, according to government data. Over the same period, the NPL ratio of banks in Shandong rose 0.86 percentage point to 3.41%, nearly double the national average of 1.87%.

The increase in NPLs has weakened the banks’ balance sheets and their profits as they’ve had to write off the bad debts and increase provisions against soured loans. In the first nine months of 2018, banks in Shandong reported a combined 27.3 billion yuan in net profit, a slump of 38.5% year on year, according to data from the banking regulator.

The surge in NPLs and the increase in disposal of soured assets reflect the urgency facing banks in the province to tackle risks from the rising number of private companies that have been hit by a liquidity crunch fuelled by the government’s deleveraging campaign and by the nationwide economic slowdown.

Concerns over the health of Shandong’s banking sector deepened last year after a number of local private companies were hit by a debt crisis. Many of the companies had provided guarantees for each other’s debts, triggering a chain reaction of defaults. Official data showed that by June 2018, 48 major private enterprises in Shandong had put up 12.46% of their net assets for such cross guarantees.

Cross guarantees are prevalent in Shandong’s private sector as the practice helps companies gain access to bank credit. But they can build into complex webs of debt, and if one company defaults, the impact can quickly spread to dozens of companies.

In late February, Shandong SNTON, one of the biggest private industrial conglomerates in Dongying city, was hit by a bond selloff that pushed the value of one of its bonds down by more than 90% in one day. The crash was triggered by speculation that the local government was pressing the company to enter bankruptcy proceedings to prevent its financial risks from spreading to companies through a massive web of cross guarantees.

Banks were sitting on almost 2.2 billion yuan of bad loans from SNTON at the end of 2018, Caixin has learned from the company’s creditors.

Cross guarantees have been a significant risk in Dongying, an industrial hub in the province. Officials from local banks have told Caixin that the complex guarantee network in the city could involve as much as 300 billion yuan of debt.

The practice contributed to the downfall of two prominent Dongying-based private companies — Shandong Dahai and Shandong Jinmao Textile Chemical Group. Controlled by the same person and among the top private businesses in Shandong, they entered bankruptcy proceedings late last year after failing to repay billions of yuan of borrowings.