U.S. to End Iran Oil Waivers for China, Others After They Expire, Sources Say 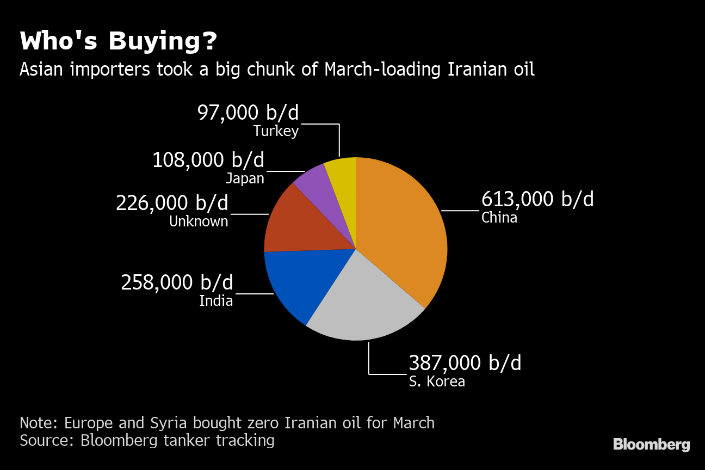 (Bloomberg) — The Trump administration won’t renew waivers that let countries buy Iranian oil without facing U.S. sanctions, according to four people familiar with the matter, a move that roiled energy markets and risks upsetting major importers such as China and India.

U.S. Secretary of State Michael Pompeo planned to announce the decision Monday morning in Washington, said the people, who asked not to be identified discussing a plan that hasn’t been formally unveiled. The current set of waivers — issued to China, Greece, India, Italy, Japan, South Korea, Taiwan and Turkey — expire May 2.

The administration will also announce commitments from other suppliers, including Saudi Arabia and the United Arab Emirates, that will offset the loss of Iranian crude on the market, according to two of the people.

The decision not to renew the waivers is a victory for National Security Advisor John Bolton and his allies who had argued that U.S. promises to get tough on Iran were meaningless with waivers still in place. Pompeo and his team had been more cautious, though they also maintained that the market was well-enough supplied to ramp up pressure on Iran.

“The maximum pressure campaign could not be maximalist until the administration cut off Iran’s oil exports,” said Mark Dubowitz, the CEO of the Foundation for Defense of Democracies and a supporter of additional sanctions on Iran. “With this decision, Iran’s economy will be under severe pressure as its hard currency earnings dry up and its foreign exchange reserves plummet.”

The price of Brent crude, the global oil benchmark, rose as much as 3.3% to $74.31 a barrel on Monday, the highest intraday price in almost six months.

Japan and South Korea, two of the U.S.’ closest allies and long-time buyers of Iranian crude, said they were aware of the reports about the waivers but didn’t confirm the decision. Japan’s chief cabinet secretary, Yoshihide Suga, said Monday in Tokyo that the government had kept in close contact with the U.S. and expressed the view that “there should be no damage to the activities of Japanese companies.”

China’s foreign ministry in Beijing didn’t immediately respond to a faxed request for comment Monday. The nation is the biggest buyer of Iranian crude.

Trump withdrew from the 2015 nuclear deal between Iran and world powers almost a year ago and revived a range of sanctions against Iran and any countries doing business with the Islamic Republic. But he and his top advisers have been wary of disrupting energy markets and spurring a hike in U.S. pump prices. For that reason, they allowed waivers for Iran’s biggest buyers of crude, including China, India and Turkey.

One of the people said that some of the countries that had previously received waivers would be given a little more time to wind down purchases. The person described that not as a waiver but more as a brief grace period.

Bolton and officials in the Energy Department have argued that it’s time for the administration to make good on its desire to push Iran’s oil exports to zero. While Pompeo’s team, led by Iran special representative Brian Hook, cautioned that a sudden removal of Iranian crude from the market — about 1.1 million barrels a day — could fuel volatility and lead to a price spike.

“We certainly aren’t looking to grant any exceptions or waivers,” Hook said in an interview this month with Kevin Cirilli on Bloomberg Radio. Oil markets are better supplied this year than last, and that “puts us in a better position to accelerate the path to zero,” he said.

The administration had also faced growing pressure from Iran hawks in the Senate, including Ted Cruz of Texas and Tom Cotton of Arkansas, to cut waivers to zero. Some senators had threatened to hold up administration nominees if the waivers stayed in place and argued that continuing to grant exemptions would be a direct contradiction of the Trump administration’s decision to leave the Iran deal.

The risk now is the decision could spike crude prices just as Trump begins to gear up to campaign for a second term. His administration had been wary of doing anything that could push crude prices above $70 a barrel.