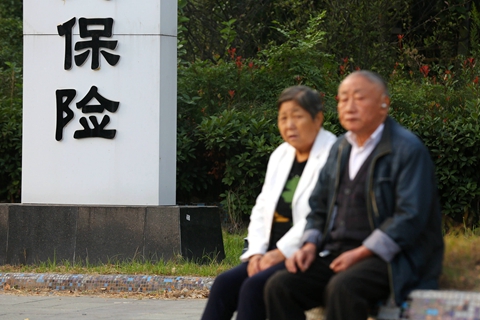 Chinese insurers have long been cautious about moving into the health insurance market. Photo: VCG

As more Chinese struggle to find an affordable insurance policy to cover out-of-pocket medical spending, some insurers have taken innovative approaches to address unmet needs, though sometimes in a controversial way.

Known as “the million yuan health insurance,” the policies often offer millions of yuan of compensation with premiums of several hundred yuan a year. Such policies, often sold online for easy purchase, are seen as an attractive option for people seeking commercial insurance to supplement the basic national medical coverage.

The emerge of the million yuan insurance plan injects some vitality into China’s tepid personal health insurance market, which has long consisted of expensive plans tailored for wealthy customers costing more than 100,000 yuan ($15,000) a year, and few alternative choices with limited coverage. Even with the pricey products, most insurers have suffered losses in their health insurance businesses.

Most of China’s nearly 1.4 billion people are covered by the state-run basic medical insurance systems, which can provide 60% to 90% reimbursement for basic medical costs. But the state insurance programs mainly cover services in public hospitals and common diseases.

But Chinese insurers have long been cautious about moving into the health insurance market, mainly because of difficulties in making accurate estimates of policyholders’ potential medical costs due to inadequate actuarial capacity and a lack of price transparency in public hospitals.

ZhongAn was the first to introduce the million yuan health insurance plan to the market, which quickly become a success and was copied by rivals.

Analysts said the average claim rate for the million yuan insurance plans is less than 30%, while administrative costs may account for 40% of premium income, enabling the policies to potentially generate attractive profits.

ZhongAn’s product was so popular and profitable that other insurers quickly followed, said one staff member at an insurance company. With more products available on the market, prices have been forced down, this person said.

But the restrictive terms have also drawn wide criticism. For instance, most insurers set complicated requirements on policyholders’ health records when processing compensation claims, which leads to a high rate of rejection and customer complaints. An industry insider said ZhongAn’s products have a claim rejection rate of as high as 20%.

Meanwhile, under most policies the insurer doesn’t guarantee an extension of the one-year coverage after expiration, a practice allowing insurers to control rising possibilities of compensation but exposing policyholders to the risk of lost protection if illness incurs, an analyst said.

But the restrictive terms are why insurers can hold down premiums to benefit more people, said Liu Pianpian, an executive at Swiss Reinsurance Co.’s China operation.

Challenges to obtain customers’ health records and make accurate estimates of potential medical costs have been the main obstacles hindering insurers in expanding their health insurance business. Instead, most health insurers prefer products such as simple critical-illness policies, which offer one-off compensation, and long-term investment-like products. Official data showed that in 2017, premium income from typical health insurance policies accounted for only 32% of the industry’s total income from health-related policies.

To encourage the health insurance business, the central government in 2017 initiated a pilot program to grant preferential taxes to insurers and customers of such policies. But the market has remained lukewarm.

Official data showed that by the end of 2018, only 319,000 health insurance policies were signed under the pilot program, generating total premium of 940 million yuan, in comparison of the total of 3.8 trillion yuan of insurance premium income that year.