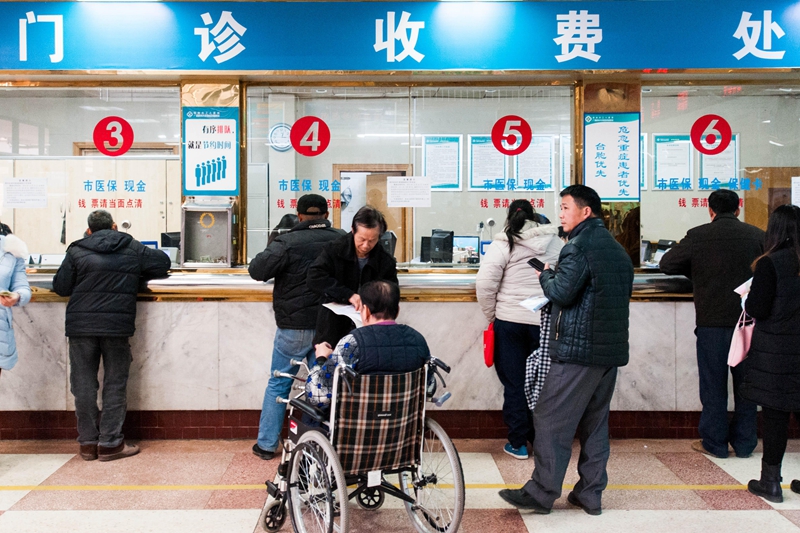 The central government has called for a greater role for commercial health insurance to supplement the social medical insurance system. Photo: VCG

For many Chinese like Meng Li, taking precautions to protect their family from out-of-pocket medical expenses is not easy.

Meng conducted thorough research of the options online and found a family health insurance policy to buy. But she canceled just three days later on the advice of an uncle, who said commercial insurance would be a waste of money.

Meng’s uncle, a veteran of a local government’s health-care security bureau, is among those who are firmly confident in China’s state-backed basic medical insurance system, which covers most of the country’s nearly 1.4 billion people and steadily runs an annual surplus.

People covered by the social safety net get 60% to 90% of their medical costs reimbursed, although the health insurance programs mainly cover services in public hospitals and common diseases.

But as the population ages and stories circulate of families that went broke over heavy medical expenses, younger Chinese like Meng are increasingly wary of the sustainability of the state system.

Their concerns are shared by some scholars. Zhu Kun, a researcher at the Chinese Academy of Fiscal Sciences (CAFS), said the state-run system can provide coverage only for basic services rather than universal coverage of all health-care costs and is unable to offer the high-percentage reimbursement of many welfare states in the West, given the country’s financial capacity.

Government coffers are already under pressure to provide health coverage for the large number of relatively poor rural and unemployed residents, Zhu said.

China’s state health insurance system includes two parts — a program for urban employees and a separate system covering the urban unemployed and rural residents. The first program collects money directly from employees’ monthly salaries and their employers, while the second relies heavily on government subsidies because of low personal contributions.

Data from the National Healthcare Security Bureau showed that in 2018, the national basic health insurance funds collected 2.1 trillion yuan ($313 billion) while spending 1.8 trillion yuan, leaving an accumulated surplus of 2.3 trillion yuan by the end of the year. However, 2018 spending rose 22.1%, outpacing a 17.6% increase in revenue.

In many countries, personal health insurance sold by insurance companies offers alternative, affordable coverage for health expenses. But in China, their role has remained marginal.

Insurance companies’ payments accounted for only 3.3% of Chinese medical institutions’ 2016 income, while basic medical insurance provided 56% and individual payments, 40%, according to Zhu Junsheng, a financial expert at the State Council’s Development Research Center.

The central government in recent years has called for commercial health insurance to play a bigger role in supplementing the social insurance system. But inadequacies of cost controls and unsophisticated management, as well as complicated market conditions, are slowing insurers, analysts said.

But for a long time, health insurance policies were not a common household purchase for most Chinese families because of high prices and few options. Such policies often provide very limit coverage that already falls under the social insurance system or target only wealthy customers for high-end medical services.

With the rise of internet finance, younger generations of Chinese consumers have shown growing interest in commercial health insurance, but choices are few. A number insurers in recent years launched similar policies designed for young customers with cheaper premiums and high compensation rates, but under strict terms for claims. The restrictive, sometimes opaque terms for compensation and patients’ health records are controversial but enable insurers to hold down premiums, said Liu Pianpian, an executive at Swiss Reinsurance Co.’s China operation.

Why have insurers moved so slowly to tap this seemingly huge market? The main reason is difficulties in cost control, industry sources said. Insurers have found it hard to make precise estimates of policyholders’ potential medical costs because of inadequate actuarial capacity and a lack of price transparency in public hospitals, they said.

A senior physician at a major Beijing hospital said it is common that doctors offer excessive treatments or prescriptions for patients covered by commercial insurance as a way of boosting hospitals’ incomes.

Unlike the state-run basic medical insurance system, which has strong bargaining power with hospitals and price control mechanisms, insurers are often in a weaker negotiating position.

“Many Chinese consumers have the mindset that they must earn the compensation back if they buy health insurance,” an insurance company executive said.

Such mentality has led to fraud cases in which policyholders work with hospitals to falsify spending records to support medical claims, industry sources said. Insurance companies have used big-data analysis and spot inspections as well as other measures to reduce such risks, but obtaining true information is still a challenge.

“I need to go to several hospitals to check one customer’s health record because their data are not shared,” said an insurance company employee. “It is really difficult for health insurance companies to control costs.”

Sun Jie, an insurance expert at the University of International Business and Economics in Beijing, proposed at this year’s top legislative meetings that the government push forward the establishment of a unified database connecting public hospitals, medical institutions and insurance companies so that they can share patients’ records. Such a platform would help promote standardized medical services and enable insurers to precisely estimate business costs, Sun said.

But opponents argue that such broad sharing of health records with insurance companies would put patients’ privacy at risk.

Caixin learned that state-owned China Insurance IT Management Co. has recently led a taskforce to connect insurance companies’ databases with the Ministry of Human Resources and Social Security in hopes of getting the industry greater access to data, but the work is still at a preliminary stage.

With more data, insurers would be able to offer better prices for health insurance, said an insurance executive, adding that compared with other products, health insurance requires more complicated calculations.

Some insurance companies have taken more proactive steps to tap the potential health insurance market. Most of them are seeking to extend their business to hospital operation or health management to gain direct patient information to support the insurance business.

Companies like Sunshine Insurance Group and Taikang Life Insurance have invested in private hospitals. Others like Ping An Insurance Group have set up subsidiaries to operate online health consultancy and doctor-appointment services. Some smaller players are testing the waters to provide long-term health management services.

While the new business approaches still face challenges from established public hospitals and the fledgling market, they are worth exploring, said Zhu at the cabinet’s think tank. “It still takes time to explore how these could take root in China,” he said.