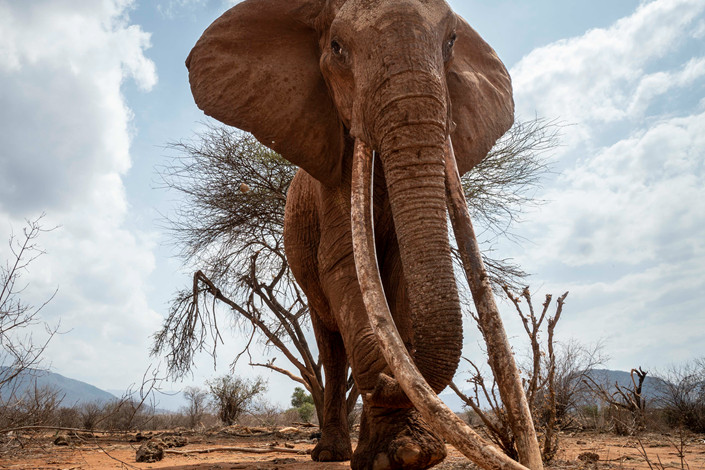 An elephant in Tsavo, Kenya on March 13. Photo: IC

China’s customs administration has seized more than 500 tons of smuggled endangered animal and plant products in 2019 alone, including 8.48 tons of ivory, officials said this month.

Meanwhile the total weight of smuggled ivory was up a staggering 192 times. Of the 182 smuggling cases investigated this year, 30% involved ivory.

The sale of ivory and ivory products has been illegal in China since the start of 2018, amid a broader crackdown on smuggling, but the illegal trade has continued. In March, China seized 2,748 smuggled ivory tusks — weighing 7.48 tons — in the largest smuggling cases the country has seen so far this year.

A wildlife conservation expert told Caixin that Guangdong is a major gateway for smuggled endangered animal and plant products because transport routes through ports, the air and overland are extremely dense and busy, and its proximity to Hong Kong, Macao, and Southeast Asia facilitates international transport. Smugglers conceal goods and use falsified customs data to move them across international borders and into China.

Wang Wei, director of GACC’s ports supervision department, said the sheer volume of people and goods passing through China’s borders each year makes enforcing bans difficult. In 2018, a total of 117 million shipping containers, 39 million vehicles and vessels, and more than 650 million people crossed China’s borders in both directions. “The trade volume of imported and exported goods and the number of people entering and leaving the country has been continuously increasing,” Wang said. “Customs is under a lot of pressure.”

Last September, international nongovernmental organization (NGO) World Wildlife Fund (WWF) said that Beijing’s ban on ivory products “has had positive effects” on the global ivory trade. Only 14% of respondents to a survey commissioned by WWF and TRAFFIC, an NGO working to prevent the trafficking of endangered species, claimed to have purchased ivory in the past 12 months, a significant drop from 31% before the ban was implemented.

However, many people in China do not take issue with buying products from endangered animals, according to a report released last June. Of those who had bought elephant products, including ivory, in the past year, 85% said that the practice was socially acceptable. The figures for buyers of rhino, pangolin and tiger products were 76%, 67% and 69% respectively. Less than half of the population surveyed at the time was aware of the new ivory ban. A 2017 report from Los Angeles-based conservation NGO Elephant Action League estimated China is the world’s largest market for rhino horn.

At the press conference, GACC Vice Minister Hu Wei said that the administration will continue to crack down on illegal smuggling of endangered animal and plant materials. He said the administration will improve departmental collaboration, strengthen port supervision, promote cooperation with international anti-smuggling regulations, and increase public awareness of both the issue of illegal smuggling and its criminality.