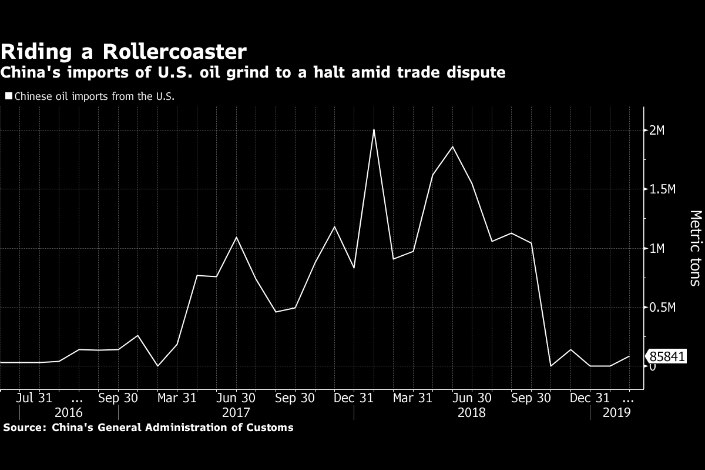 (Bloomberg) — It seems Asia’s biggest oil buyer can’t stay away from crude pumped in the world’s fastest-growing supplier for long.

A supertanker laden with U.S. oil is floating off China’s eastern coast, awaiting discharge at one of the Asian nation’s busiest ports. The vessel will soon be joined by more ships that will make the two-month voyage from America as long-simmering trade tensions between Washington and Beijing begin to ease.

While refiners in China shunned U.S. oil imports as the nations imposed tit-for-tat tariffs in an escalating trade war, buying interest has resurfaced on optimism that the world’s top two economies are nearing a resolution to their dispute. With geopolitical turmoil disrupting supply from Iran to Venezuela, buyers are feeling more assured the purchases won’t break government regulations, according to refinery officials and traders in Asia.

China International United Petroleum & Chemicals Co. Ltd. (Unipec), the trading arm of state-owned refining giant China Petroleum & Chemical Corp. (Sinopec), provisionally chartered the Coswisdom Lake to pick up crude from the U.S. Gulf Coast on May 20 for delivery to China, shipping fixtures show. The tanker, with capacity of two million barrels, is just one of many that are being sought by companies such as Occidental Petroleum Corp., Mercuria Energy Group Ltd. Co. Ltd., and Equinor ASA for the same journey.

Meanwhile, oil tanker Maran Artemis is currently off the port of Qingdao with a draft of more than 20 meters (65.6 feet), which indicates a fully-loaded vessel. The tanker loaded U.S. oil at the Southtex ship-to-ship transfer area off the coast of Galveston in late February, according to Bloomberg ship-tracking data.

Last year, Chinese refiners gorged on American oil pumped everywhere from inland shale fields to deepwater wells in the Gulf of Mexico, lifting imports to a record high of more than two million metric tons in January 2018. The nation’s purchases later ground to a halt by October, as tensions between the Donald Trump and Xi Jinping administrations flared.