By Isabelle Li and Liu Yukun 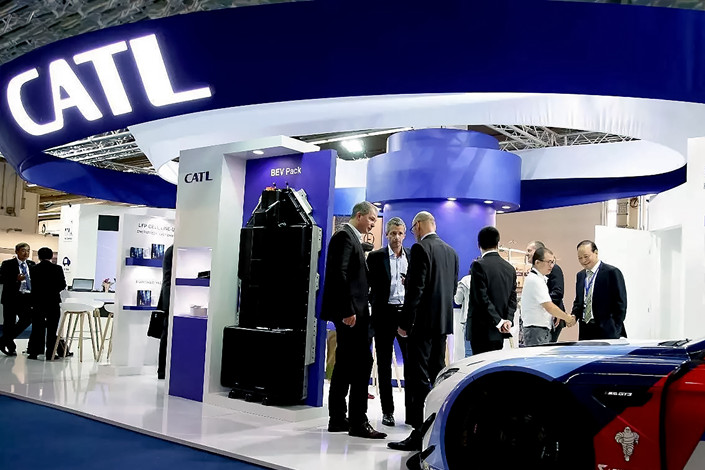 China’s leading electric vehicle (EV) battery-maker has reported a 48% surge in revenue and a dip in net profit of more than 12% in its first annual financial results since it went public last year.

Shenzhen-listed Contemporary Amperex Technology Co. Ltd. (CATL), which has benefited from a fast-growing EV market backed by local governments, posted revenue of 29.6 billion yuan ($4.41 billion) for 2018, even as its profitability slipped on the previous year.

Net profit attributable to shareholders dropped by 12.66% year-on-year to around 3.4 billion yuan. The net profit margin dropped 8 percentage points to 12.6%, the lowest since 2015, according to Caixin's calculations.

When it released the results on Thursday the company also announced plans to set up an up to 4.4 billion yuan battery tie-up with giant state-owned carmaker China FAW Group Corp. CATL will take a controlling stake of 51%.

FAW Group joins a litany of Chinese carmakers going into business with the battery company, as quality batteries are scarce yet crucial for electric vehicles. State-owned automakers GAC Group, SAIC Motor, Dongfeng Motor, and local auto giant Geely have all set up joint ventures with the battery-maker.

Founded in 2011 in East China’s Fujian province, CATL has risen to become the world’s largest EV battery producer. The company made its trading debut on China’s Nasdaq-style ChiNext board in June, after piggybacking on generous government support as part of Beijing’s shift from fossil fuel cars to clean up the country’s air and develop technologies for export.

Those efforts have helped China become the world’s largest EV market. The nation logged around 1.25 million sales of new-energy vehicles last year, 60% more than 2017. Total production is expected to pass 1.5 million units this year, a Ministry of Industrial and Information Technology spokesman said in a regular press briefing Tuesday.

News that two electric vehicles spontaneously caught fire in the past week have fueled safety concerns. Experts told Caixin that while it was likely the batteries were responsible, completely eliminating such risks is impossible, and electric vehicles are generally safer than traditional cars in that respect.