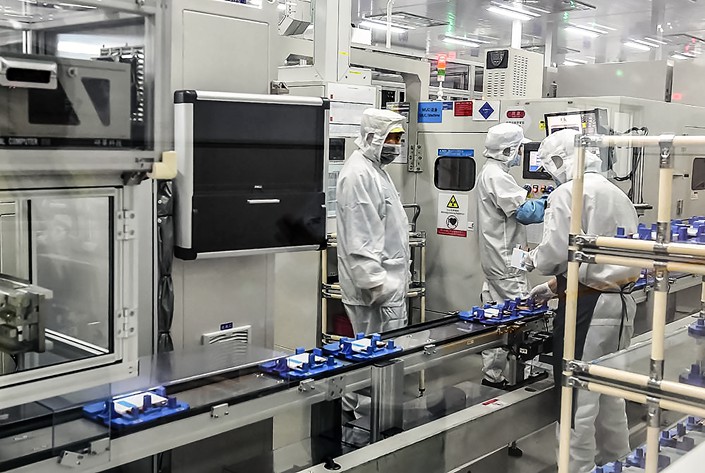 A lithium-battery assembly line is seen at a CATL factory in Ningde, Fujian province, on Jan. 10. Photo: VCG

Through its Chinese joint venture BMW Brilliance, BMW obtained the right to invest as much as 2.85 billion yuan ($427 million) in Fujian province-based CATL, according to a filing Tuesday by the battery maker. The alliance also includes a long-term battery supply pact, according to the filing.

The move is another step in BMW’s strategy of expanding its foothold in the world’s largest vehicle market which includes the world’s fastest-growing electric auto sector. Other global automakers are also gearing up to invest more in China, which accounted for more than half of electric vehicle sales worldwide last year.

The potential investment would make BMW the first foreign carmaker to take an equity stake in the Chinese battery maker. A 2.85 billion yuan investment translates to about 1.6% of CATL, based on the Shenzhen-listed company’s recent share price. The option would kick in if the Chinese company decides to sell new shares to raise funds in China or offshore, according to the CATL filing.

In addition, BMW Brilliance agreed to buy 815 million yuan of battery-related products from CATL and to pay 2.85 billion yuan up front for a long-term battery supply contract, according to CATL’s filing.

CATL has been a supplier of BMW Brilliance since 2012. A closer tie between the companies was reported last week when Chinese Premier Li Keqiang visited Germany, during which the two countries signed a raft of deals worth 20 billion euros. German media, including international broadcaster Deutsche Welle, reported that BMW signed a deal to source $4.7 billion of electric vehicle batteries from CATL over the next few years.

According to data from the China Association of Automobile Manufacturers (CAAM), 777,000 new-energy vehicles were sold in China last year, up 53% year-on-year, and new-energy vehicle production in 2017 jumped 54% to 794,000.

In a push to further encourage clean-energy consumption, Chinese regulators recently rolled out a quota system requiring that new-energy vehicles account for a specified percentage of each automaker’s China sales starting next year. The new mandate has led to a series of electric vehicle joint ventures between global automakers and local brands.

CATL said last week it will build its first overseas factory in Germany with an initial investment of 240 million euros ($282.2 million).