By Li Liuxi and Fran Wang 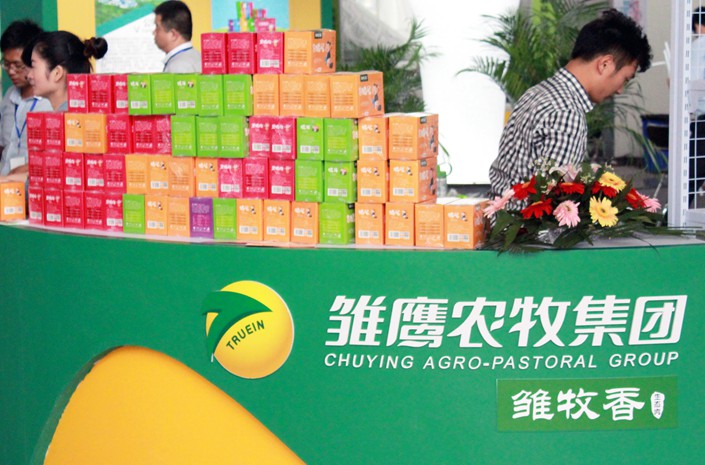 Pig farm operator Chuying Agro-Pastoral Group Co. Ltd., which is buckling under the pressures of African swine fever, mounting debt and an investigation by China’s securities regulator, has warned investors that it is at risk of being delisted after reporting enormous losses.

The company has been put under the “special treatment for warning of delisting risks” since Friday because its accounting firm has given a disclaimer of opinion for the firm’s 2018 report, Chuying Agro-Pastoral said in a filing (link in Chinese) with the Shenzhen Stock Exchange. When a company is placed under special treatment, the daily price-movement limit for its stock is lowered to 5% from 10%.

In the statement earlier this week, Chuying Agro-Pastoral said that its listing will be suspended if its auditor gives its 2019 annual report an “adverse opinion” or a “disclaimer of opinion.” And that could cause it to eventually be kicked off the exchange.

When an auditor issues a “disclaimer of opinion,” it is stating that it can offer no opinion on whether an entity’s financial statements fairly represent its financial results.

Among the reasons for its disclaimer of opinion, the accounting agency cited uncertainties in the sustainability of Chuying Agro-Pastoral’s business due to its debt defaults and ongoing lawsuits against the firm, which have caused the court to freeze some of its assets and bank accounts, according to a separate stock exchange filing by the firm.

Other reasons include the auditor’s inability to accurately verify and value the company’s assets due to restricted access to its properties amid the African swine fever outbreak, and an investigation by the China Securities Regulatory Commission into the firm, which is suspected of violating of laws and regulations, the filing said, without elaborating.

Chuying Agro-Pastoral logged a loss of 1.1 billion yuan ($163.2 million) in the first quarter of this year, after losing 3.9 billion yuan during the whole of 2018, according to separate reports it filed with the Shenzhen bourse late Wednesday. The company earned a profit of 45.2 million yuan in 2017.

It blamed last year’s poor performance on low pork prices in areas hit by African swine fever — where its main farms are located — and difficulties in selling its pigs due to a ban on moving the animals out of infected regions. Its business was also affected by a liquidity crunch due to the government deleveraging campaign, which strained its financing channels, the company said in the 2018 report.

The company had missed repayment on a total of 3.1 billion yuan in debt by the end of 2018, according to the report. It is mired in 33 pending lawsuits against it, most involving debt disputes. Its liability-to-asset ratio jumped to 87.89% last year from 71.81% a year earlier.

Desperate to reduce its debt burden, Chuying Agro-Pastoral said in November that it wanted creditors to accept ham and premium pork products rather than cash as interest payments. Creditors owed a combined 271 million yuan in principal and interest had agreed to the offer. The principal would be repaid in cash but payment was being deferred, it said back then.

African swine fever is fatal to pigs but does not affect humans. The first outbreak in China was reported in August 2018 in the northeastern province of Liaoning and has now been found in all 31 provincial-level regions on the mainland, leading to the culling of more than 1 million pigs. Agricultural ministry officials have forecast that pork prices will hit record highs in the second half of the year due to short supply.

However, Chuying Agro-Pastoral remains cautious about its prospects for this year. The swine fever situation is still “severe” and any new outbreak could trigger consumer panic and a slump in demand for pork, causing a “direct impact on the company’s ability to make a profit,” it said.

The company’s default risks remain because the liquidity squeeze has continued, it added in the 2018 report.