By Hou Qijiang and Mo Yelin 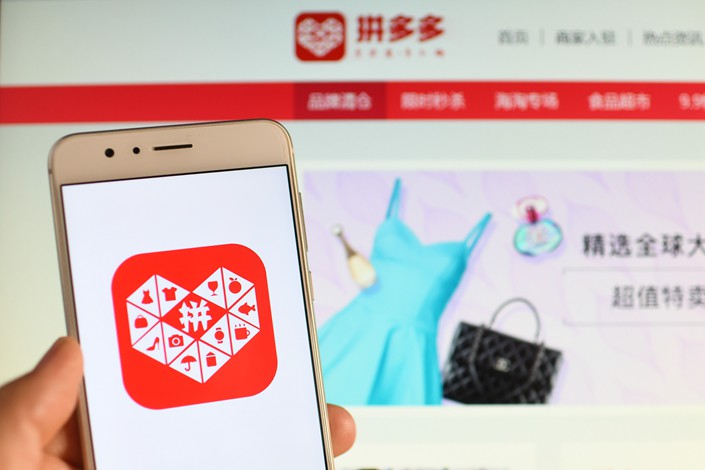 The founder of China’s No. 3 e-commerce platform, Pinduoduo Inc., lashed out at the sector’s practice of “forced exclusivity,” saying merchants shouldn’t be forced to choose only a single platform to sell their products on.

This unspoken rule isn’t likely to go away soon, but it doesn’t create value for consumers, merchants and manufacturers, wrote CEO Colin Zheng Huang in his first letter to shareholders after the company’s initial public offering in New York last year.

Like many other internet businesses, China’s booming e-commerce sector is dominated by a handful of firms, which can stymie their rivals with exclusive products and services.

“Attempts to establish or prolong any monopolistic control are both wasteful and destructive … such a practice will eventually be dismantled,” Huang wrote.

Although Huang didn’t mention any rivals, his letter has widely been seen as a swipe at Alibaba Group Holding Ltd., the e-commerce behemoth that Pinduoduo earlier this month accused of forcing some merchants to pull products from its site.

In just four years, the Shanghai-based newcomer has developed itself into China’s third-largest e-retailer, trailing only Alibaba and JD.com Inc. That has been largely due the “group buying” model the company has pursued, in which buyers of groceries, electronic devices and other goods are encouraged to buy in bulk alongside friends and relatives in order to access discounts.

When reached by Caixin, an Alibaba spokesman declined to comment on Huang’s letter. However, Caixin learned from sources familiar with the situation that Alibaba has recently demanded that merchants clarify whether they are cooperating with Pinduoduo or have done in past.

In the letter, Huang likened his company to a prepubescent Yao Ming — a Chinese NBA player who stands almost 2.3 meters (7 feet six inches) tall — saying his company is like a “little grown-up” — a young company that has grown very fast.

Amid intense competition, Pinduoduo has ploughed a massive amount of cash into sales and marketing. Last year, it posted a net loss of 10.3 billion yuan ($1.5 billion), compared to a loss of 498.7 million yuan the year before.

Pinduoduo has previously argued that such hefty investment is necessary and Huang once again defended the company’s strategy.

“At this current stage, Pinduoduo has the ability to generate revenue, but it is weakly correlated with the large amount of spending we choose to incur” he said. “We will continue to focus on building our intrinsic value and proactively seek investment opportunities that can drive the long-term value of our company.”