In Depth: Foxconn Founder’s Next Ambition — Leader of Taiwan 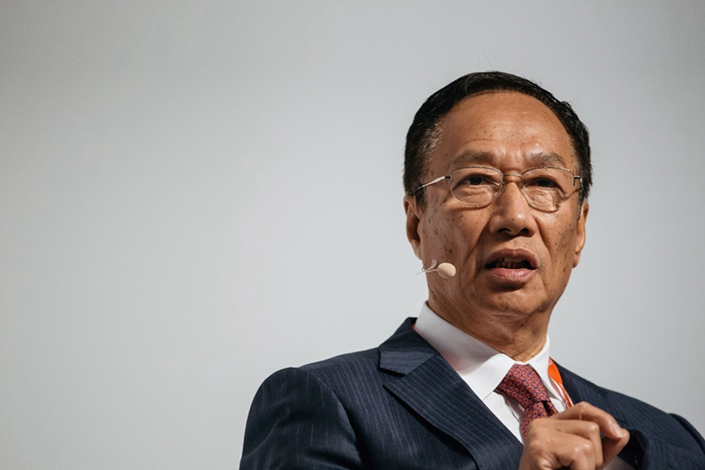 In a conference hall of Taiwan’s Kuomintang party (KMT), Foxconn founder Terry Gou bowed to portraits of the party’s founding father Sun Yat-sen and former presidents Chiang Kai-shek and Chiang Ching-kuo. With the old-fashioned ritual, the billionaire officially announced April 17 his decision to seek the nomination of the KMT, Taiwan’s main opposition party, for Taiwan’s top office in the 2020 election.

Sixty-eight-year-old Gou, whose company assembles iPhones and iPads for Apple, is Taiwan’s richest man and a business legend on the island, which has been self-governing and apart from the Chinese mainland since the end of the Civil War in 1949.

Gou could be a strong contender in the race for Taiwan’s top leadership, given his wealth and fame. He has cultivated an image as self-made entrepreneur. Hon Hai Precision Industry Co. Ltd. (Foxconn), the manufacturing giant Gou started more than 40 years ago, now employs 1.4 million people globally and is key supplier for Apple, Amazon, and other global tech giants. In 2018, Foxconn booked revenue of NT$5.29 trillion (1.15 trillion yuan or $171 billion), accounting for a third of the global electronic manufacturing service industry.

Gou has shown political acumen as he built close ties with Beijing and Washington. Across the Taiwan Strait, Foxconn has conducted billions of dollars of business on the mainland since the late ‘80s, and Gou is a welcomed guest of both local authorities and the top leadership, including President Xi Jinping. In Washington, President Donald Trump called Gou a “good friend” and endorsed Foxconn’s $10 billion investment proposal in Wisconsin in July 2017.

A recent poll showed that Gou’s support has outpaced that of incumbent leader Tsai Ing-wen and former Premier Lai Ching-te of the ruling Democratic Progressive Party (DPP). Both Tsai and Lai are potential DPP candidates in the next election.

Gou is also more popular than Ko Wen-je, an independent politician and the mayor of Taipei, who is also seen as a strong candidate for the office. The biggest challenger for Gou may be Han Kuo-yu, another potential KMT candidate and the current mayor of Kaohsiung, Taiwan’s second-largest city in the south. Han generated wide support among the electorate and within the KMT when he won a mayoral election in the DPP stronghold of Kaohsiung in May 2018. He is widely considered Gou’s biggest potential competition — if he chooses to run.

But not all are convinced that Gou will win the KMT’s nomination because of his widely known tantrums and lack of political experience. Some younger voters — who tend to support the DPP and Taiwan independence — may not be impressed by his deep business ties with the mainland.

As Gou steps out of his factory office to stand under spotlights of the political stage, his business empire, strongman-style management approach and views on Taiwan’s relationship with the mainland and the U.S. will come under closer public scrutiny. If he succeeds, he would have to step down from all position in Foxconn, leaving the tech giant with an unprecedented challenge in the absence of his absolute leadership.

In announcing his candidacy, Gou said he most values “peace, stability, economic prosperity and a better future,” whether as a businessman or while exploring other opportunities.

In 1988, Gou gained his first foothold on the mainland in a four-story townhouse in suburb Shenzhen, where he declared to 150 newly recruited workers that “the world’s largest factory will start here.”

Now Foxconn employs more than 300,000 workers in Shenzhen, and its main factory there covers 2.3 square kilometers of land, where the first iPhone was manufactured. In 2012, Foxconn’s annual revenue exceeded the rest of Taiwan’s top 10 manufacturers combined.

Despite controversies related to reports of excessive work demands, poor living condition and underpayment, especially after a series of suicides among workers in 2010, Foxconn’s business in Shenzhen is seen as a big success. Gou is one of the most-wanted guests for city officials who desperately seek new investment. And Gou is good at bargaining for favorable conditions.

The rapid expansion reflects Foxconn’s intention to transform itself from an electronic supplier into a tech service provider, partly because of slowing business with Apple, its biggest customer, analysts said.

As of March, Foxconn had at least 841 subsidiaries and affiliated companies with businesses including smartphone assembly, PCs and servers, TVs, internet equipment, e-commerce, biotech, electric vehicles, robots and drones.

Dong Min, vice president of the market research organization AVC, said Foxconn’s expansion in recent years reflects Gou’s long-time dream of building Foxconn into a solid brand in the terminal devices market. But other analysts expressed concerns that Foxconn may stretch its business range too broadly to focus on any sector.

Gou still keeps his office in a small building at the Shenzhen factory and lives in a factory dorm when he stays there, people familiar with him said.

“We factory men are like this,” Gou often tells visitors surprised by his plain office.

But the businessman is no doubt the absolute commander of the tech giant as everyone obeys unconditionally, said one person close to Foxconn. “Gou is probably the only one who can speak clearly what Foxconn will do in the future,” said a senior executive.

But Gou will have to step down all from business positions if he wins the KMT nomination for the 2020 election, under Taiwan law. Analysts say they are concerned that Gou’s departure will leave his massive business empire rudderless. But Dong said it will only take some time for the company to work out a new governance system driven by its many capable senior executives.

For any leader of Taiwan, managing cross-strait relations and positioning Taiwan’s strategy with the U.S. are always the key policy issues.

Among the declared KMT candidates, Gou’s position on cross-strait relations is one of the more clear-cut: stability in the Taiwan Strait and accommodating the growth of a cross-strait economy. He also advocates for Taiwan to stop buying weapons from the United States and instead make it an economic and technological partner.

Gou was the first Taiwan businessman to visit the White House after Trump won the presidency, with a $10 billion investment offer to build the Wisconn Valley technology park in Wisconsin and create 13,000 jobs.

Gou disagrees with many Taiwanese politicians, including Han, who argue that Taiwan should rely on the U.S. for defense. Instead, he says, the money Taiwan uses to purchase outdated weapon from the U.S. should be channeled into investment to bring advanced technology from the U.S.

Taiwan’s defense should not depend on the U.S., but rather on “peace,” he declared.

Gou also opposes the tough stance of Tsai Ing-wen’s administration toward the mainland. “They don’t see the reality,” Gou said. “The key for Taiwan to take part in regional economic cooperation is in Beijing.”

Gou’s business strategy of maintaining close partnerships with the mainland and the U.S. to benefit Taiwan’s industry and economy may provide a convincing option for Taiwan.

Douglas Paal, vice president for studies at the Carnegie Endowment for International Peace, said cross-strait relationships have been seeking a delicate balance that is “neither too hot nor too cold.”

Zhang Wenzheng, a professor at Xiamen University, said Gou’s race for the top office may trigger concerns in the U.S. because of his close ties with the mainland. But Gou’s decades-long experience doing business with the mainland will bring greater stability to the cross-strait relationship. He also has the ability to deal prudently with Taiwan’s relations with the mainland and the U.S., Zhang said.

But Gou could win support from the U.S. if he can push forward a peace pact across the Taiwan Strait, said Dennis Hickey, a political studies professor at Missouri State University.