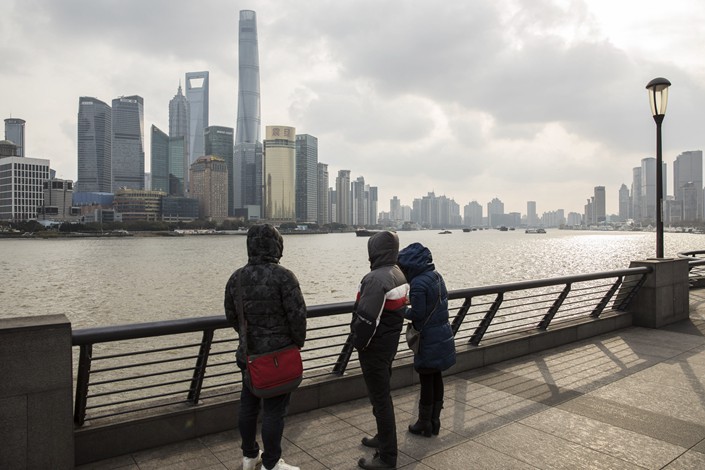 Pedestrians stand along the Bund in Shanghai. Photo: Bloomberg

(Bloomberg) — China took another step in opening its $44 trillion financial sector to the world, announcing plans to remove limits on ownership in local banks and scrap size requirements for foreign firms that operate onshore.

Among the changes, overseas insurance groups will be allowed to set up units in the world’s second-biggest economy, the China Banking and Insurance Regulator said on Wednesday as high-level trade talks between China and the U.S. got underway in Beijing.

The rules are an incremental step along the path to opening China’s financial system, months after foreign firms were permitted majority stakes in local securities joint ventures. While Wednesday’s changes could lead to full-blown local bank takeovers — a potential shortcut into the market — the likes of JPMorgan Chase & Co. and Goldman Sachs Group Inc. may have to wait years before finance in China looks like Wall Street or the City of London.

“We are seeing a trend of China gradually and steadily opening up its financial industry to the outside world,” said Ge Shoujing, a Beijing-based senior analyst at the Reality Institute of Advanced Finance.

HSBC Holdings Plc holds shares in Bank of Communications Co., and while the London-based firm hasn’t recently commented on increasing that ownership, Bocom’s board secretary said last year it would be open to such a move. Wall Street titans from Morgan Stanley to UBS Group AG operate securities joint ventures in China, and have seized on the financial opening to seek greater stakes in the units.

The changes build on steps China’s leaders have taken in the past 18 months to level the playing field between overseas and local firms, as they’ve come under increasing pressure from U.S. President Donald Trump’s administration. Fresh funds would also provide timely support for a banking industry under pressure from a slowing economy and rising bad loans.

“China is delivering on promises made to further open the financial markets to foreign companies, both big and small,” said Liao Chenkai, a Shanghai-based analyst at Capital Securities Corp. “This may also be a possible response to the trade war with the U.S., pushing China to further open its markets.”

While China has taken measures to ease barriers of entry for global firms, the efforts haven’t so far changed the competitive landscape. In sectors from banking to insurance and brokerage, local firms still dominate with more than 90% market share. Lengthy and often opaque application processes can deter foreign investors, while key areas of finance, such as bond underwriting, are mainly reserved for domestic companies.

“The approval process may not be very transparent so it could be difficult to know whether and how much to commit in terms of people, time and money,” said Hubert Tse, a partner at Chinese law firm Boss & Young in Shanghai who advises global banks, insurers and financial institutions in China. “From experience, usually the biggest firms would get their foot in the door first, so others, even though qualified, may not be considered initially.”

The pace of the opening has received some criticism from foreign CEOs. Oliver Baete, chief executive officer of Allianz SE, the first overseas company to win approval to set up an insurance holding unit in China, said last month that the country must speed up allowing foreign firms to open local branches.

- Remove asset requirements for foreign banks wanting to set up branches and those wanting to be locally incorporated in China. The thresholds were previously $20 billion and $10 billion, respectively

The CBIRC in August removed some limits on foreign ownership of Chinese lenders and bad-debt managers, following through on a pledge made in late 2017 to amend rules and welcome global players. The latest changes scrap all ownership restrictions, though the regulator will still have to approve deals.

Following the previous rounds of easing, ING Groep NV became the first foreign firm announcing plans to take a 51% stake in an onshore retail banking venture under China’s new ownership regulations. The Dutch firm is also the largest shareholder in Bank of Beijing Co., with a 13% stake. It hasn’t publicly declared any interest to raise that holding.

“This time it’s not just about opening the door wider to the biggest global firms, but also to smaller and niche players,” said Dong Ximiao, deputy dean of Chongyang Institute for Financial Studies at Renmin University in Beijing. “China is going to to see a full blossoming of players and embrace more competition.”

Despite the potential on offer, international companies will face challenges as they try to establish themselves in China. The main competition comes from government-controlled rivals that dominate the financial system and have longstanding relationships with the state-owned enterprises that drive much of China’s economic activity.