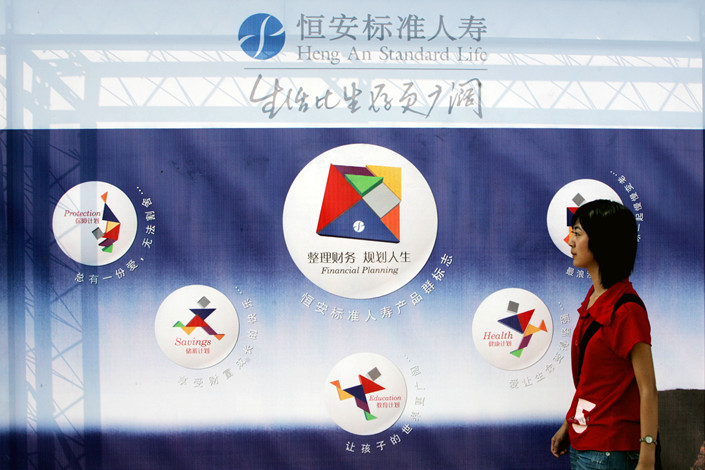 As other countries push China to open its financial services markets to overseas participation, the insurance industry has become a focus due to the overwhelming dominance of domestic names.

Heng An Standard Life, a joint venture between U.K. insurance giant Standard Life Aberdeen PLC and Tianjin TEDA International, has received permission to set up a pension insurance business in China, the China Banking and Insurance Regulatory Commission (CBIRC) said in a statement.

China’s pension insurance industry is currently dominated by eight domestic firms. The country’s total pension assets are set to reach $1.8 trillion by 2030, according to estimates by the World Bank.

Heng An Standard Life, which Standard Life Aberdeen and Tianjin TEDA both hold a 50% stake in, was set up in 2003. It brought in 3.28 billion yuan in revenue from health, life and savings insurance premiums last year, and has businesses in provinces and cities across China, including Beijing and Tianjin.

The move to allow the joint venture into China’s pensions market comes amid a national push to open up the financial industry. At the April 2018 Boao Forum for Asia, President Xi Jinping said the country would significantly broaden access to its markets, including the financial services markets.

Shortly after, central bank chief Yi Gang released a list of 11 measures aimed at expanding access to financial markets for foreign participants, including raising the cap on foreign investors’ shareholding in life insurance firms to 51% from 49%, and abolishing the limit altogether after three years.

China’s pension market presents a major opportunity because the country is expected to shift away from state pension provision “to a focus on occupational and individual savings” as its population ages, Standard Life Aberdeen said in a statement released last week.

The Heng An Standard Life decision is part of a slew of recent approvals involving insurance companies from outside the Chinese mainland, including Chubb Limited, which was allowed in early March to raise its ownership in Huatai Insurance Group from 20% to 26%, and the Hong Kong-listed AIA Group, which received permission in February to establish sales centers in Tianjin and Hebei.