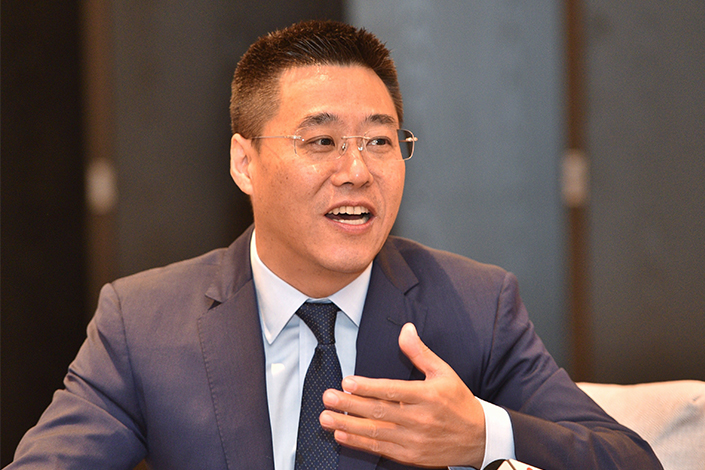 Veteran financier Chen Shuang has resigned from a Hong Kong subsidiary of financial giant China Everbright Group Ltd. to lead the launch of a fund that targets investments in a southern economic hub.

Chen’s resignation coincides with China’s broader effort to grow the Guangdong-Hong Kong-Macao Greater Bay Area into a financial and technological powerhouse to rival those that have sprung up around New York, San Francisco and Tokyo.

Chen, 51, resigned as executive director and CEO of China Everbright Ltd. on Friday for reasons that the company only described as a “work arrangement,” according to its filing to the Hong Kong Stock Exchange. Chen had worked for the Hong Kong-listed company, which specializes in private equity investment and asset management, for nearly 15 years.

After his resignation, Chen will concentrate on leading the preparations for the launch of a fund that will target investments in the Greater Bay Area, a spokesperson with Everbright told Caixin. His tasks include designing the fund’s structure and raising money from investors.

The company is also participating in the preparations, the Everbright spokesperson added.

Under the Greater Bay Area plan, China aims to integrate Hong Kong, Macau and nine Guangdong province cities into a world-leading economic and innovation hub. The area encompasses some of the country’s most dynamic cities, noted for their strong financial service and high-tech manufacturing capabilities. The area accounts for 5% of China’s population but generates more than 11% of its gross domestic product, or 10.87 trillion yuan ($1.64 trillion) last year, surpassing that of South Korea, according to Caixin’s calculation based on official data.

The new fund plans to raise money from subsidiaries of large state-owned enterprises such as Everbright Group, China Merchants Group Ltd. and China Life Insurance Co. Ltd., Caixin has learned from sources with knowledge of the matter.

The fund’s shareholders have yet to been determined and fundraising hasn’t been completed, the spokesperson said.

In late March, Chen said in a speech that the fund would have a cross-border structure, with yuan-denominated funds mainly targeting mergers and acquisitions on the Chinese mainland and offshore U.S. dollar-denominated funds chiefly investing in mid- and late-stage tech firms. He gave the speech when Everbright released its annual report, adding that the fund would be different from Everbright’s existing funds, which focus more on early-stage tech firms.

Currently, Chen serves as a director of APlus Partners Ltd. and APlus Partners Capital Ltd., which were founded in Hong Kong in late April, official records show. The only shareholder of each company is CEL (Secretaries) Ltd., a wholly-owned Everbright subsidiary.

Zhao Wei, 48, will take over Chen’s positions at Everbright, according to the exchange filing. He is also a nonexecutive director of Hong Kong- and Shanghai-listed China Everbright Bank Co. Ltd., another Everbright Group subsidiary.

Over the past months, multiple investment funds targeting the Greater Bay Area have emerged. In December, experienced investment banker Hu Zhanghong launched a private equity fund in Hong Kong that aims to invest in high-tech industries in the area. Previously, Hu had worked for nearly 10 years as CEO of CCB International (Holdings) Ltd., a Hong Kong-based investment arm of China Construction Bank Corp., one of the country’s “Big Four” state-owned commercial banks.

A previous version of this story misstated the Greater Bay Area’s contribution to China’s gross domestic product. It is more than 11%.