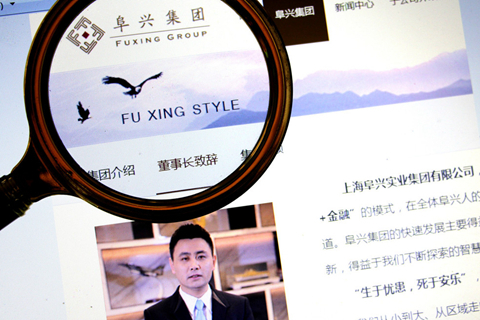 A total of 13 executives of Fuxing, including its fugitive chairman, have been detained on charges of alleged fraud. Photo: IC Photo

Five more senior executives at Shanghai-based private equity firm Fuxing Group have been detained by police on charges of fundraising fraud as investigators found a black hole of more than 20 billion yuan ($2.9 billion) left by the defunct conglomerate.

The Shanghai prosecutor said Wednesday that four deputy presidents of Fuxing Group — Wang Yuan, Wang Yongsheng, Cao Zhaojin and Zhu Jinhua — have been arrested for alleged fundraising fraud, a crime that could mean as much as life in prison depending on the nature of the case and the suspect’s motives.

Yu Liang, head of Fuxing’s subsidiary Shanghai Yilong Wealth Investment Management Co., was also detained on charges of illegally collecting money from the public, which carries a penalty of as much as 10 years in jail, according to the prosecutor.

Fuxing’s downfall unfolding since last summer has turned into a financial scandal that has become one of the biggest crises ever to hit China’s private equity industry. The company controls four private equity funds that have registered 160 asset management products that took in money from private investors and banks. The group managed assets worth more than 35 billion yuan in 2017, with trading volume topping 30 billion yuan, according to Fuxing’s website.

The case sheds light on the brewing risks in China’s booming private equity sector, which is plagued by shady practices. Increasing numbers of private equity funds have exploited legal loopholes and have begun to act like investment banks and other types of traditional financial institutions, exposing their clients to magnified risk, experts said.

Caixin learned that a police investigation since last year has collected evidence that Fuxing sold billions of dollars of wealth management products to the public that it was not able to repay. The company used the funds to reimburse previous clients and for personal spending of executives, police found. Fuxing is also accused of manipulating the stock market.

The Fuxing debt crisis imploded in June 2018 when Chairman Zhu Yidong fled the country amid a cash crunch of several subsidiary private equity funds, stoking fears about the whereabouts of billions of dollars of funds raised from investors and borrowed from banks.

Zhu was eventually returned to China Aug. 29 and is under investigation. Seven other Fuxing executives were arrested in September.

Shanghai police said in a briefing in March that Fuxing has issued wealth management products since 2012, taking in public funds even when it had no profitability. The company used cross-guarantees with affiliated firms to reassure investors on returns.

Caixin learned that police froze 15 billion of assets under the names of Fuxing and its senior executives, including equities, properties, cash and vehicles. Police are also pursuing related parties to return profits from business with Fuxing.

Shanghai police have been stepping up efforts to recover Fuxing’s assets to compensate investors. Last year, they froze some shares of Donghai Securities Co. Ltd. and Dalian Insulator Group Co. that are owned by Fuxing.

Authorities have yet to decide on a plan to compensate Fuxing’s investors for losses, Caixin learned.

A Shanghai police officer told Caixin that the Fuxing case is complicated as it involves both individual and institutional investors. The recovery of Fuxing’s assets is also challenging because some of the assets have been pledged for loans, the officer said.