Photo Essay: The Passengers of an Old Train Central to Mountain Life

Text and photos by Chen Liang 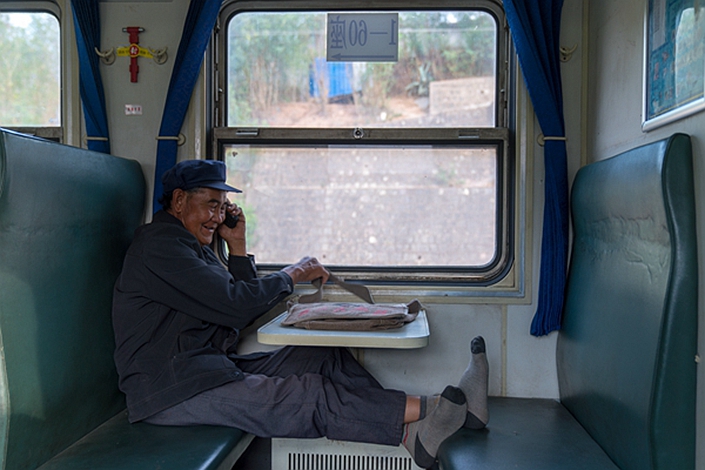 The passengers on the 6162/1 train typically travel short distances. Each car seats 128 people, but most are usually empty. Passengers often stretch out over multiple seats.

Along the Jinsha River, a string of small train stations dot the cliffs of the valley. While most are so small they have no ticket booths, they are the arteries that connect Yunnan’s remote mountain villages to the rest of southwestern China. Half a century ago, the railway line carrying the 6162/1 train changed the lives of the people here.

Peng Qinghu, 72, recalls that before the Chengdu-Kunming rail line opened, he had to walk more than 80 kilometers (50 miles) through the mountains from Talu Upper Village to Yuanmou county. If he was fast it would take two days, but he had to make it to a village before nightfall to find a place to stay.

After the train line was up and running, no one from the village had to walk to the town anymore. When the 6162/1 line opened, the fare was less than a single yuan — but that was equivalent to three days’ work. Now the fare is 3 yuan (45 U.S. cents), the amount Peng makes from selling a kilogram of rice. He takes the train to Yuanmou to sell vegetables and buy medicine.

The train has no air conditioning, no seat covers and no tea kettles. Li Jian, a tea stoker on the train, is one of the few employed by the Kunming Railway Bureau. The water must be boiled using coal.

Most of the 128 seats in each car are empty, because passengers typically ride short distances. In April, the temperature in the car hit 35 degrees Celsius. In the heat, men remove their shirts, tourists take off their shoes and nap lying across the seats.

Li Qiongmei, 49, awaits the train at Yudong station — the only way for some 1,000 Nuozha villagers and 400 Kubuku villagers to travel outside of their villages.

After the Tomb Sweeping festival in April 2019, Li took the 6162/1 train to Kunming. She held her suitcase, sat alone and stared out of the window. She wore a pearl necklace with a silky blue and white collared short sleeved shirt. She and her family have spent half of their lives on this train. She and her husband took this train every week, their backs laden with bags filled with vegetables that would be sold in Panzhihua to save for their son’s studies. Later, she took this train to help her younger sister with her children, and then to Kunming to help her son with his children. Nowadays, she travels back and forth on this line every month. Her husband lives at one end, and her son at the other.

Wang Chunlin, 60, has been riding this train line his whole life. When he was in primary school, before the Chengdu-Kunming rail line was open, the teachers gave train safety classes. They were not allowed to play on the rails. When a train came, they had to stay still. Back then, Wang’s son would come along with him to go into town. Today, the scene is similar, but his grandson has replaced his son.

The construction of the Wudongde Hydropower Station and the Chengdu-Kunming multi-track rail line is causing residents along the line to worry that the 6162/1 train, which currently operates at a loss, will be scrapped. Wang worries that if this train ceases operations, their fares to town will double. If that happens, he does not know how he will earn money.