Yuan Falls to 2019 Low on Setback in Trade Talks 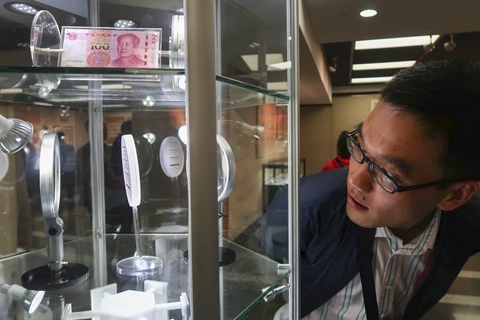 The possibility of breaking 7 is relatively small despite the current pressure, analysts said. Photo: IC Photo

The Chinese yuan dropped to its lowest levels against the U.S. dollar in four months Monday as the latest round of trade talks between the world’s two biggest economies failed to produce a deal and both nations imposed new tariffs on each other’s goods.

The central parity rate of the Chinese yuan weakened 42 basis points to 6.7954 against the dollar Monday, the lowest since Jan. 24, according to the China Foreign Exchange Trade System.

The yuan’s plunge was expected amid an escalating trade war between the United States and China, but it is still largely unlikely for the onshore yuan to top 7 to the dollar in the near term, market participants said.

“Both the yuan and Korean won are under selling pressure as worries over the trade talks ferment,” a forex trading head at a major bank said, “The market close in Hong Kong for a holiday has caused a lack of liquidity, which contributed to the big fluctuation in the offshore yuan rate.”

The market is seeking a reasonable level, and no greater decline in the offshore yuan is expected when the Hong Kong market opens Tuesday after the global markets responded Monday to the trade news over the weekend, said a forex trader at a foreign bank in Hong Kong.

However, the consensus in the forex market is that the yuan faces deprecation pressure against the dollar in the short term. This pressure is building up on expectations that the long-term interest-rate spreads between China and the U.S. could further narrow and the renewed trade conflict could further intensify, said Zhang Ming, chief economist of Ping An Securities Co.

China Monday announced plans to increase tariffs on $60 billion a year of U.S. imports, after a tariff rise by the U.S. on $200 billion of Chinese products starting Friday and a fruitless two days of trade talks last week in Washington.

Several forex traders said there was no sign of large liquidity inflows to the market Monday. But if the onshore yuan continues to fall below 6.90, they won’t rule out the possibility that the Chinese central bank could intervene in the market.

There has been speculation about whether and when the yuan could break the key 7 yuan per dollar level. With Monday’s sharp fall, that debate has resumed.

The possibility of breaking 7 is relatively small despite the current pressure, said Zhao Qingming, chief economist of the derivatives institutes of the China Financial Futures Exchange.

Excessive depreciation of the yuan may not be conducive to stable exports and is not helpful to bilateral trade negotiations, Zhao said.

He said he expected the yuan to stabilize in a range of 6.6-7 yuan per dollar after slight further depreciation the rest of this year.