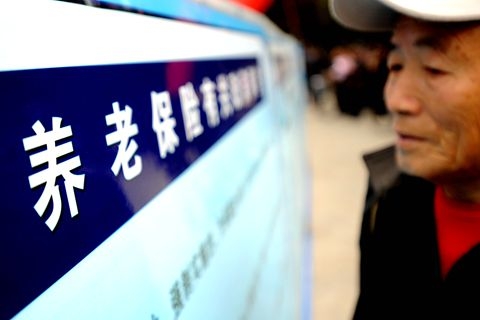 A recent report from the Chinese Academy of Social Sciences predicted that the state pension funds collected in 2019 will not be able to meet expenses this year. Photo: VCG

A market-oriented personal pension market, promoted by regulators as a new third pillar of China’s retirement safety net, is a “blue ocean” that will create explosive demand in the increasingly aging country, according to a report by McKinsey & Co. released Tuesday in Beijing.

Banks, insurance companies and mutual funds each have advantages but also need to improve their products and services to capture market share, according to the report.

China’s current pension system still mostly relies on the state-run basic pension fund for urban workers and rural residents, or the first pillar, which accounts for more than 70% of the system, about 4.4 trillion yuan ($640 billion).

The second pillar of 1.6 trillion yuan is made up of enterprise and occupational annuities, accounting for about 30% of the system and limited to some large enterprises and foreign companies.

The envisioned third pillar of individual commercial pension insurance is still in its infancy. McKinsey’s researchers didn’t put a figure on the third pillar’s potential size.

With the state-run pension fund facing shortfalls as the world’s largest population ages and policy shifts toward lightening social security burdens on businesses, China is encouraging its citizens to shoulder a greater share of their retirement savings responsibility by promoting the development of third-pillar pensions.

A recent report from the Chinese Academy of Social Sciences predicted that the state pension funds collected in 2019 will not be able to meet expenses this year, and whole system is expected to run dry by 2035.

In some provinces, local pension funds have already been running deficits. The central government in July created a national pool to take a portion of money from the richest provinces and municipalities to help struggling provinces and cities pay retirees.

These funds resemble target retirement funds offered by Vanguard and other big money managers in the U.S., but they don’t offer the same tax incentives.

Last May, a pilot tax-deferred pension insurance project was launched in Shanghai, Fujian Province and Suzhou in Jiangsu Province. Under the plan, individuals are allowed to defer tax on part of their income that is used to buy commercial pension insurance until they retire and draw money from the fund.

However, the development of the third pillar hasn’t been smooth because of a lack of options for consumers and not enough policy incentives for providers, the McKinsey report found.

Insurance companies, with their advantages in license and customer acquisition, could be more innovative in product design, such as providing one-stop pension and health insurance packages, McKinsey suggested.

Pension products should not only aim for performance ratings of three or five years but should look at long-term investment strategy, said Sun Zheng, a project manager at McKinsey.

Banks’ advantage lies in knowledge of their customers. If banks provide a platform on which customers can view their retirement income from the first, second and third pillars, they can customize asset management plans consisting of short-term investment and long-term retirement needs, Sun suggested.