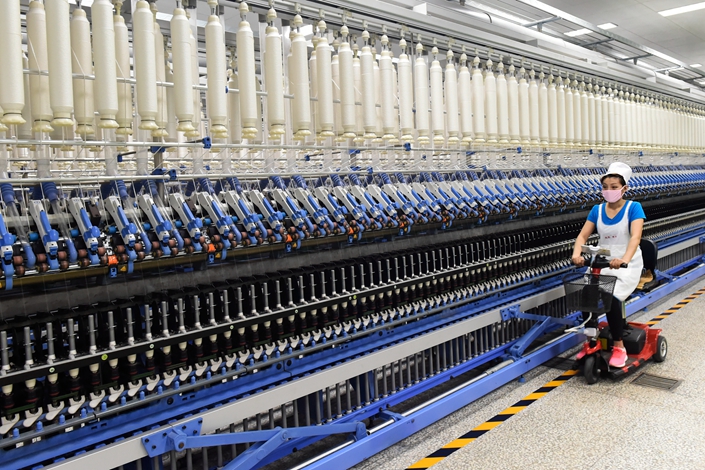 Hong Kong-listed Weiqiao Textile Co. Ltd., a major textile mill in China, has been censured by the Hong Kong Stock Exchange for failing to inform investors in a timely manner about transactions it made with its parent company.

The exchange’s listing committee released a censure document Friday on Weiqiao’s breaches of listing rules that deprived shareholders and other investors of timely information related to the connected transactions it had made with its parent company, Shandong Weiqiao Chuangye Group Co. Ltd., which is controlled by billionaire Zhang Shiping and ranked 185 on the 2018 Fortune Global 500 with revenues of $53.2 billion.

The stock exchange also further censured Weiqiao Textile’s Chairwoman Zhang Hongxia — who is a daughter of the billionaire — as well as Chief Financial Officer Zhao Suwen and company Secretary Zhang Jinglei. All three are executive directors of the company.

In 2016, Weiqiao Textile conducted transactions to fulfill Weiqiao Chuangye’s funding needs, providing the parent company with loans and fund transfer channel service. The value of such transactions reached nearly 9.5 billion yuan ($1.4 billion) in 2015 and 2016, according to an announcement that Weiqiao Textile released in January 2018.

“This is a serious case as the transactions involved significant sums of money and took place repeatedly during the course of 2016,” the Hong Kong Stock Exchange said in Friday’s document.

In addition, the listing committee further directed the company to appoint an independent compliance adviser within two months from the publication of the censure document. The adviser is supposed to provide compliance consultation for the following two years. The three executive directors will also have to attend 24 hours of training on the exchange’s rules for compliance and directors’ duties, according to the document.

This is not the first time that the textile-maker has found itself in trouble. On March 22, 2017, Weiqiao Textile’s shares were suspended from trading because it failed to publish an audited 2016 report on time because its auditor raised questions. The company’ shares resumed trading in August that year.

Weiqiao Textile stock closed 2.46% lower at HK$2.78 ($0.35) per share on Monday. The share price fell 1.72% on Friday, before the censure document was released after the close of trading.