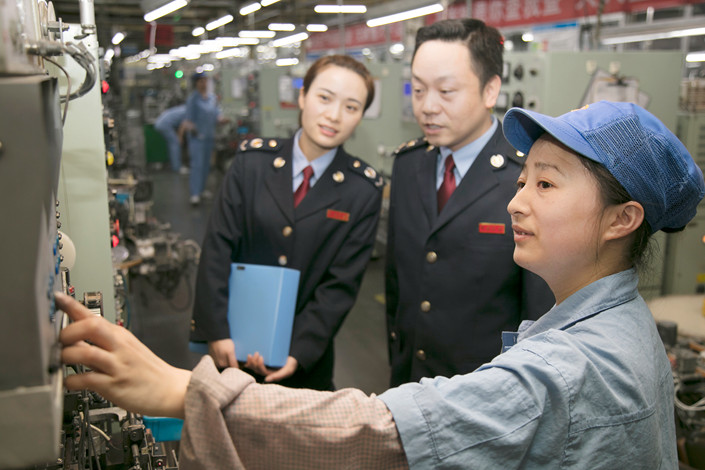 In the current uncertain economic climate, the market pays great attention to policy direction. Recently, the April economic data on exports, consumption and investment came in lower than market expectations. Employment and inflation in particular affected people. How will the Chinese government respond? The leaders of macroeconomic departments have said that the policy toolbox is rich and sufficient and fully capable of dealing with internal and external uncertainties. This confidence is commendable. We look forward to relevant departments cherishing and making good use of policy tools, preparing and adjusting for rainy days ahead of time. More importantly, we should also understand the strengths and weaknesses of the existing policy toolbox in order to reform and increase economic flexibility. This should also bring the combination of future policy tools more in line with the requirements of the market economy.

Over the last 40 years of reform and opening, the Chinese government has deepened its understanding of economic operation and policy responses. Its approach has grown increasingly mature and has been overall quite successful. Some economists have praised China, saying it “has done almost everything right,” and this is not an overstatement. In recent years, economic growth has been declining in stages, and the old and new momentums for economic growth need urgent change. The Chinese government has put high-quality development first, has constantly adjusted the policy mix, and has continued to implement active fiscal policy and sound monetary policy. So far, these policies have been effective.

Facing many uncertain factors that have appeared recently, many scholars advocate that the first policy choice should be to improve the profitability of enterprises by reducing taxes and fees; optimize fiscal expenditure to boost consumption and investment; control liquidity through monetary policy; and enhance China’s potential growth rate through systemic reform. We take this very seriously. Specifically, in fiscal policy, the government has advanced the issuance of special-purpose local government bonds this year and has considerably reduced taxes and fees. The next step should focus on improving the performance of fiscal spending. At the same time, in monetary policy, the central bank should make adjustments in a timely way according to changes in economic growth and price trends, grasp the “degree” of regulation, and guide financial institutions to strongly support the real economy, especially small and midsize enterprises.

To make good use of the policy toolbox, we should first have a proper estimate of its advantages and disadvantages. Thanks to the reform of the economic system, China’s economic regulation has bid farewell to single administrative means and the planned economy era. At present, the National Development and Reform Commission, the Ministry of Finance, the central bank, the China Banking and Insurance Regulatory Commission, and other regulatory departments respectively implement industrial policy, fiscal policy, monetary policy, financial supervision and other regulatory efforts. And land and resources, housing, and other departments also play an important role. In China’s economic control system, both structure and total capacity tools are equally important, and the policy toolbox has distinct “Chinese characteristics” due to the combination of administrative and market-oriented means.

It should be said that these rich policy tools have been refined by the Chinese government at all levels after a long period of exploration and summary. They have been adapted to the current situation of China’s economic development and their greatest advantage is their “usefulness.” However, it should be noted that they are, after all, the product of China’s economic “emergence plus transition.” At present, the comprehensive deepening of reform has entered the “deep water zone.” The financial relations between the central government and local governments have not yet been straightened out. Financial restraint is widespread. The reform of state-owned enterprises is progressing slowly. The modern market system has not yet been reformed to be complete with sound mechanisms, unified opening and orderly competition, which makes it difficult to remove all kinds of soft budget constraints and price distortions or for it to play a signaling role. Therefore, some tools must be used. A typical example is the central bank bills that have been popular in the past. In fact, they are helpless substitutes in a situation where the national debt market is imperfect. The side effects and after-effects of some policy instruments are also quite obvious, such as the frequent changing winds in real estate controls. Some scholars believe that the global financial crisis showed that macro controls in developed countries failed, and that countries should look back and learn from China. This attitude is obviously immodest.

For this reason, the extent of “macro controls” should not be generalized, and many micro interventions should not be regarded as macro controls. Many selective industrial policies belong in this category. At the same time, macro control policies should be strengthened to avoid fighting. At present, we must pay special attention to strengthening the coordination between fiscal, monetary and financial policy.

In recent years, the slowdown of China’s economic growth has been due to the sluggish external demand caused by global economic weakness. However, the more important reason is that the residuals of the old institutional mechanism led to extensive development mode, slow optimization of industrial structures, difficulties in continuing to increase total productivity, and disappearing demographic dividends, resulting in a decline in the potential growth rate. Promoting reforms in key areas is the fundamental policy for stabilizing the economy. Reforms to state-owned enterprises, taxation and fiscal policy, land, and household registration, or “hukou,” must be accelerated. The most reliable guarantee for sustainable growth is a market environment with strong protections of property rights and fair and orderly competition. Today, we dare say that China’s economy is resilient and has much room for maneuver, largely due to previous reforms. The future still depends on systemic reform.

Therefore, unless adverse circumstances exceed expectations, macro-controls should avoid using extreme policies. Keeping the economic growth rate in a reasonable range and holding the bottom line without large-scale unemployment, the bottom line thinking of the decision-makers actually leaves room for supply-side structural adjustment and improving quality and efficiency. In the future, the strength of policies to boost economic growth should be based on the potential growth rate so as to avoid the rebound of government debt and financial risks, which are difficult to contain.

Less than 30 years ago, the 14th National Congress of the Communist Party of China established the socialist market economy as the overall goal of economic systemic reform. Compared with the long evolutionary history of the market economy, this is only a short period. From the government to the people, we have much to learn about the market economy. Fortunately or unfortunately, China has not yet experienced a complete economic and financial crisis originating from within its borders, so the existing policy toolbox has yet to pass the ultimate stress test. We should cherish the valuable experience gained from our hard practice. We should not be self-deprecating, but should maintain an open and modest attitude. We must make great efforts to understand the laws of the market economy in order to constantly enrich and update the macro-control toolbox, which is truly “never forgetting the original intention.”