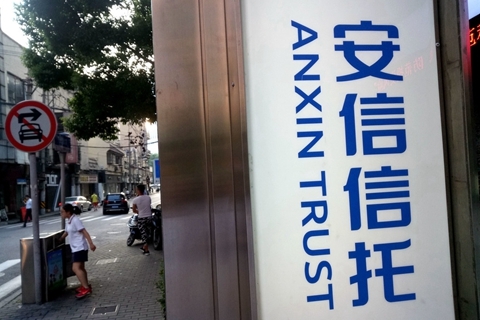 A trust that raised billions of yuan to back a rural revitalization project in western China failed to repay more than 1,000 investors on time April 28 and delayed redemptions by as long as a year after housing sales slowed and government subsidies didn’t materialize.

The trust product, issued by Shanghai-listed Anxin Trust & Investment Co., hadn’t repaid 2.8 billion yuan ($405 million) to investors as of May 13. The liquidity of Guizhou Hongde Property Co., the company managing the rural revitalization project in western Guizhou province, was hurt by the “external environment” and the company was unable to raise enough to repay investors, Anxin Trust said in a statement.

Anxin Trust didn’t elaborate, but Caixin learned that the delay in payments may have been caused by slow housing sales and a failure to obtain expected government subsidies. The deferred redemptions surprised investors as Anxin Trust reported just a month ago that the project was going smoothly.

According to the statement, the trust payouts will be postponed by a year, and the expected annualized rate of return will be increased by 50 basis points, or a half-percentage point. Because the trust contract allowed for deferred payment by as much as 12 months, the project is not considered in default as it is only postponing redemption, a person close to the matter said.

In its first-quarter management report released April 9, Anxin Trust said Guizhou Hongde Property was in sound financial position and the project was under orderly development.

The project, located in the Wudang district of Guiyang, the capital of Guizhou province, aims to redevelop more than 1,200 acres of rural land over 10 years into a modern residential community of condos, schools, hospitals, parks, public transportation and leisure facilities. Guizhou Hongde raised funds through the trust product and plans to repay investors using revenue from housing sales in the project.

Guizhou Hongde has been optimistic about its property sales, but the overall real estate market in Guiyang is showing signs of a downturn. Meanwhile, certain government subsidies in the project related to road construction have not been put in place as expected, Caixin learned.

Guizhou Hongde is taking measures actively to raise funds by slashing sales prices, refinancing with lenders and negotiating with the government on the subsidies, Anxin Trust said. The trust company said it has also sent its own staff to the project company to facilitate fundraising.

At the same time, a major shareholder of Guizhou Hongde issued a statement distancing itself from trust’s delay in payment.

Guizhou Sunac Jiye Real Estate Development Co., a subsidiary of Chinese property giant Sunac China Holdings that holds a 45% stake in Guizhou Hongde, said the trust was a liability before it became a shareholder of Guizhou Hongde, and it terminated a partnership with Guizhou Hongde on March 1 because the company didn’t obtain certain lands as agreed. It also said it is exiting its equity investment in Guizhou Hongde, without elaborating.

Caixin learned from several sources that the lands mentioned by Guizhou Sunac are not related to the project underlying the trust. Guizhou Sunac couldn’t be reached immediately for comment.