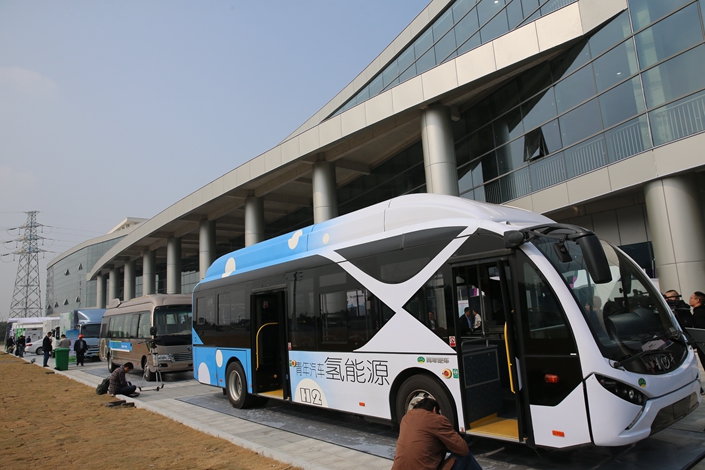 Last week, news broke about a Chinese automobile company that claimed it had successfully tested an engine that “runs on water.” Pang Qingnian, the CEO of auto company Youngman Automobiles Co. Ltd., claimed his proprietary technology generated hydrogen from water through a catalytic chemical reaction.

Online, the overwhelming reaction was doubt. How could an engine transform water into hydrogen without another energy source? Could 300-400 liters of water power an engine for 300-500 kilometers? Did the local government really throw 4 billion yuan (almost $580 million) at the project?

Over the weekend, state media outlet CCTV went to the Youngman workshop in Nanyang to interview employees and Pang himself, raising more questions than answers. The company released a statement attempting to clarify their “breakthrough.”

Now, officials from the Nanyang government are playing down their support and involvement.

1. Is it cutting-edge technology? Or is it just a scam?

According to Pang and the company, the engine runs on hydrogen created through a chemical reaction involving water and a raw material such as aluminum. Pang claimed that the catalyst used in the engine is recyclable, thus bringing down costs.

CCTV noted that Pang was vague about further details. He would not divulge any technical information and told Shanghai-based media outlet The Paper that it was based on company secrets.

Engineers showed CCTV reporters a “special powder” that they said was the catalyst, saying when water meets the powder, it produces one cubic meter of hydrogen per kilogram. The powder was developed by a team from the Hubei University of Technology led by professor Dong Shijie, they said.

Yuan Chen, a chemical engineering professor at the University of Sydney in Australia, expressed his skepticism, citing the laws of physical science.

“My first impression is it’s definitely not real,” Chen told Caixin. “They didn’t provide detailed information, but my understanding is the catalyst here could make the reaction between aluminum and water happen faster, but you won’t reduce the total energy (required for the reaction).”

“Hydrogen is not an energy source, it’s just an energy carrier — so for a car to use water as fuel you must input other energy to generate hydrogen.” The kicker: it usually takes more energy than would eventually come from the hydrogen generated.

Creating hydrogen from water without using energy would breach the fundamental laws of thermodynamics, he added.

2. The company behind the car is not known for its reliability.

According to state-owned Xinhua News Agency, Pang and his company have faced official sanction and have been labeled “dishonest” repeatedly on the Supreme People’s Court credit information disclosure system.

Youngman Auto has also been sanctioned by the Ministry of Industry and Information Technology (MIIT) for defrauding energy subsidies in February 2017. The ministry ruled that the battery capacity of new-energy vehicles sold to a Shanghai bus company in 2014 was less than what Youngman had claimed. MIIT also reduced subsidies provided to Youngman since some of their vehicles did not meet the subsidy threshold.

The company and its subsidiaries have also been involved in various loan dispute cases.

3. Everyone is ducking claims of billions in local government spending on the project.

Youngman said in a company statement that it had teamed up with the Nanyang government to build a research and development base in the city and produce buses, delivery vehicles, and cars running on hydrogen-powered engines. They also agreed to build an automobile industrial park for them in Nanyang. A total of 4 billion yuan, according to Youngman, was to be used to construct the park.

“At present, the project has not yet been established or made any substantive progress, and there is no issue with the 4 billion yuan investment,” the statement says. “Next, we will continue to conduct further feasibility studies on the project in a positive and prudent matter, strictly control risks, and ensure that there are no problems with the investment funds.”

On Friday, Pang told The Paper that the company hadn’t yet applied for a patent. The company statement contradicted this: “At present, relevant patents have been obtained,” it read.

4. Many of Pang’s claims just don’t square with the science.

Pang claims hydrogen-powered cars are “clean,” but Chen says while using pure hydrogen itself is clean, the environmental cost comes in making it. Aluminum takes plenty of energy to produce from ores. Then there’s the energy required to treat waste from the reaction between aluminum and water. “The more chemical steps you do, potentially more additional energy would be required, and more waste would be generated,” he said.

“It’s not as simple as just using water.”

Another setback is the cost. Aluminum is not cheap — it is far cheaper to produce hydrogen from natural gas in the way the industry does currently, Chen says.

Another issue is that the chemical reaction would produce aluminum oxide, a solid particle that would be deposited throughout the reaction system, potentially clogging it up.

5. Experts say the technology isn’t new. And while it’s unlikely to be commercially viable for cars, it could have other uses.

The technique Pang is touting, if viable, is not useless. Chen suggests on-site, remote and emergency applications where hydrogen cannot be delivered and aluminum powder reacting with bases can be used to generate hydrogen as a fuel at a pinch. Nevertheless, using the process to power a car would be needlessly costly and inefficient.