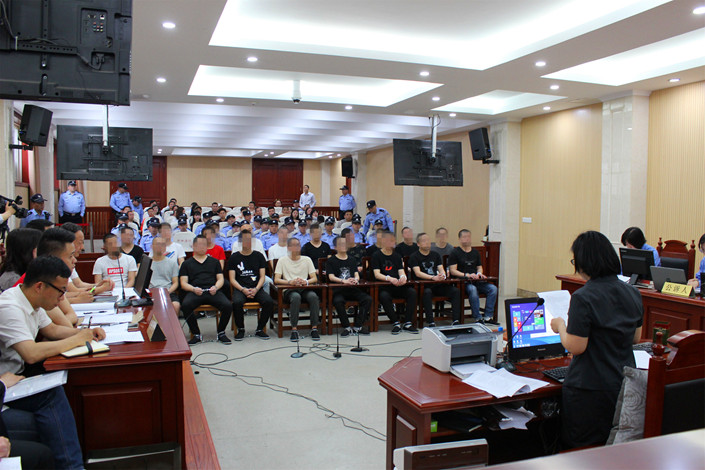 In some private lending disputes heard by the No. 1 Intermediate People’s Court (not shown here) over the past eight years, 277 cases involved criminal fraud or illegal and violent debt collection, accounting for 9.24%. Photo: IC Photo

Private lending cases heard by the Beijing No. 1 Intermediate People’s Court and the five courts underneath it have spiked twelvefold since 2011, according to a white paper released Tuesday.

China has seen a proliferation of informal and private lending channels in recent years, such as online and through “peer to peer” (P2P) platforms. Many individuals, private small and midsize enterprises with poor credit have begun to turn to private lenders to seek funds, and the private lending market has become an important part of China’s multi-level financial system.

The Beijing No. 1 Intermediate People’s Court heard its first online lending dispute in 2016, and the number has only grown since.

Online lending cases have raised their own issues, like how to identify parties involved. The No. 1 Intermediate People’s Court said its “White Paper on Private Lending Cases 2011-2018” comes in response to the uptick in cases related to private lending and their changing nature.

According to the white paper, four-out-of-five of the private lending disputes handled by the No. 1 Intermediate People’s Court and the five underneath it involved individuals rather than companies — mainly legal representatives, shareholders, and senior managers of small and midsize enterprises.

The paper says the trend reflects the difficulty private enterprises — particularly small enterprises — face obtaining financing, and also reflects the “worries” of borrowers over the enterprise bankruptcy system. Lenders typically require companies to borrow in the name of legal representatives or shareholders.

Private financing costs have risen significantly in the past eight years, with the average cost of financing exceeding 20% in 2018. The proportion of cases heard by the intermediate court where the loan agreement involved a clear interest arrangement rose from 54 in 2011 (19.29%) to 499 cases in 2018 (68.08%), according to the white paper.

In some private lending disputes heard by the No. 1 Intermediate People’s Court over the past eight years, 277 cases involved criminal fraud or illegal and violent debt collection, accounting for 9.24%. Additionally, the white paper found that dishonesty in litigation — such as false statements, false witnesses, and malicious litigation — frequently occurs in private lending cases. Often, there are severe discrepancies in facts between the two parties.

The white paper also summarized some of the challenges in hearing private lending cases, such as difficulty determining the facts of a case. Over the eight years surveyed, parties lacked a written loan agreement in more than 597 cases. Many lacked evidence such as debits and contracts that could prove the existence of a legal relationship.

Online lending cases present their own issues. Many online lending platforms lack compliance, accept transfer of creditor’s rights, provide guarantees to the outside world, and lend from their own pool of funds. The boundaries between illegal fundraising and legitimate financing are blurry, resulting in prominent and complex legal problems.

Furthermore, given the number of people and quantity of funds involved, if a platform “bombs” it creates huge social and financial risks. Courts also face a huge number of civil disputes involving internet lending. Once lawsuits make it to court, the limited judicial resources available to resolve disputes become a factor. Finally, new problems are constantly emerging, such as the collection and authenticity of electronic evidence.

“According to our statistics, there were more than 1,500 online lending platforms at peak, and there are nearly 1,000 at present. The rise of online lending has the distinct characteristics of the times and is also accompanied by problems requiring regulation, such as the protection of invest rights after the P2P explosion,” said Wu Zaicun, president of the Beijing No. 1 Intermediate People’s Court.