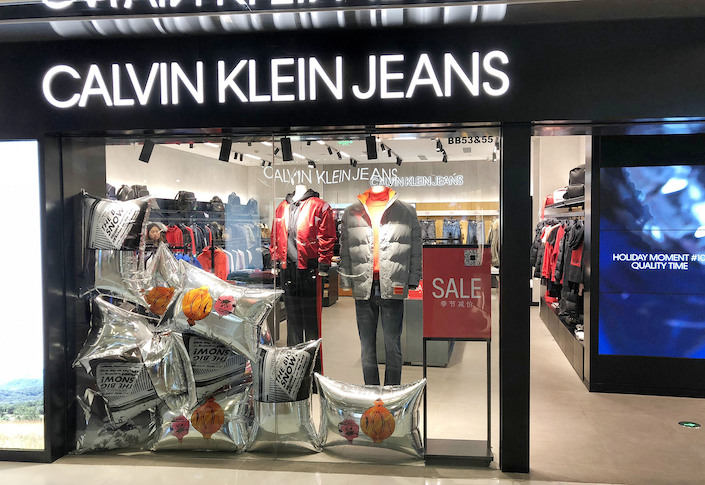 The parent company of Calvin Klein plunged the most in a decade Thursday on trade war fears. Photo: VCG

(Bloomberg) — President Donald Trump’s trade war with China is creating a mess on both sides of the Pacific for American fashion labels Tommy Hilfiger and Calvin Klein.

Shares of PVH Corp., the parent company of both brands, plunged the most in a decade Thursday after reporting that the escalating battle is causing anxious American and Chinese shoppers to buy less.

The stock fell as much as 14% to $85 on Thursday, the company’s biggest intraday drop since 2008, erasing the stock’s year-to-date gain through Wednesday. The New York-based company trimmed its outlook for revenue this year in a quarterly report released after the close of trading Wednesday.

PVH has found success in recent years by exporting U.S. styles to middle-class consumers around the world, and international sales make up more than half of the company’s total revenue. But its momentum has stalled in China, with both Tommy Hilfiger and Calvin Klein struggling to attract Chinese shoppers after the Chinese New Year holiday in February. This was a “direct result” of the trade dispute, Chirico said.

In contrast to other luxury brands that rely heavily on e-commerce sites such as Alibaba Group’s Tmall, Calvin Klein and Tommy Hilfiger have ventured beyond China’s biggest urban centers and into many of the nation’s smaller cities, executives said. This strategy has helped underpin sales growth in recent years. But it’s in these areas, which are often hubs for manufacturing, that the company sees consumers as especially anxious about the trade uncertainty.

PVH management said it’s optimistic that trade uncertainty will subside in the second half of the year. The company continues to tailor its products to Chinese consumers and said it will hire new brand ambassadors and start a loyalty program, among other measures.

PVH’s sharp stock decline followed losses across the apparel category. Abercrombie & Fitch Co., which Wednesday reported slowing growth at its Hollister brand, fell as much as 8%, while Urban Outfitters declined as much as 3%.