By Wang Zili and Isabelle Li 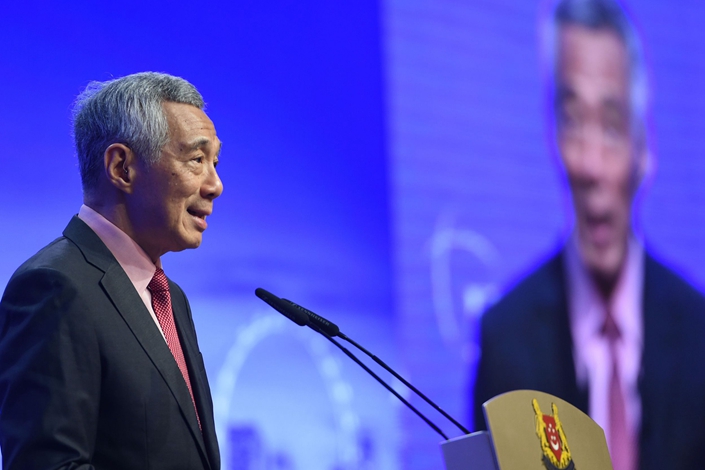 Singapore’s Prime Minister Lee Hsien Loong speaks at the opening of the Shangri-La Dialogue in Singapore on Friday. Photo: VCG

China and the U.S. need to work together to bring global systems up to date, rather than upend the current system, Singaporean Prime Minister Lee Hsien Loong said at an annual defense forum.

“A mutual lack of strategic trust” doesn’t bode well for compromise between the two countries, but that doesn’t mean a showdown is inevitable, Lee said Friday night at the opening of this year’s Shangri-La Dialogue in Singapore. The forum drew dozens of national defense leaders, including both acting U.S. Secretary of Defense Patrick Shanahan and Chinese Minister of National Defense Wei Fenghe.

In his opening remarks, Lee pointed out that “China’s growth has shifted the strategic balance and the economic center of gravity of the world.”

The country may still be decades away from becoming a fully developed advanced country, but it cannot wait decades to take on larger responsibilities. “China has to recognize that it is in a totally new situation created by its own success. It can no longer expect to be treated the same way as in the past when it was much smaller and weaker,” Lee said.

At the same time, the rest of the world will have to adjust to China taking on a larger role in global affairs. The U.S. is the country that may need to make the most difficult adjustments. Yet regardless how difficult it is, “it is well worth the U.S. forging a new understanding that will integrate China’s aspirations within the current system of rules and norms,” he said.

Countries have to accept that China will continue to grow and get stronger, and it is neither possible nor wise for them to prevent this from happening, Lee said. China will expect more of a say in crafting new international rules in areas such as trade, intellectual property and cybersecurity, because it sees the present rules as having been created without its participation. “This is a reasonable expectation,” Lee said.

Unfortunately, Lee noted that stress has also built up between the two countries over multiple issues including cyberespionage, 5G technology, freedom of navigation, human rights and especially trade, where the two countries have reached an impasse.

On trade, attitudes on both sides have been hardening. The leadership of both the U.S. and China are sensitive about being seen as weak in their own countries. The U.S. wants to show it has come out ahead in any deal. For its part, China, because of its long history with the West, cannot afford to show that it is succumbing to Western pressure to accept an “unequal” deal, Lee said.

“If both sides treat their trade dispute purely on its own merits, I have no doubt their trade negotiators will be able to resolve it. But if either side uses trade rules to keep the other down, or one side comes to the conclusion that the other is trying to do this, then the dispute will not be resolved, and the consequences will be far graver than a loss of GDP,” he warned.

Besides sharing his views on China-U.S. relations and the ongoing trade tensions between the two, Lee also stressed the need for regional or multilateral trade arrangements as a “second-best solution” to universal trade agreements. Advocating for the Comprehensive and Progressive Agreement for Trans-Pacific Partnership (CPTPP), which has taken effect with Singapore’s participation, Lee said more and more countries have expressed interest in joining, including China. “They are not ready to join now,” Lee said, “but I hope that they will seriously consider doing so some time in the future.”

At the forum, which ended on Sunday, both the U.S. and China’s top defense officials gave speeches.

Shanahan met with his Chinese counterpart General Wei Fenghe Friday afternoon before the forum opened. Shanahan said the meeting was “constructive and positive,” but in his major speech on Saturday, the defense secretary accused China — without mentioning it by name — of subverting the rule-based order and posing “the greatest long-term threat to the vital interests of states across this region.”

Wei, China’s defense minister, took the stage Sunday morning, making it the first time since 2011 that a top defense official from China has attended the forum. Wei did not shy away from sensitive issues like Taiwan and the South China Sea, and warned the United States not to meddle in security disputes over these issues. The general stressed that China would “fight to the end” if anyone tried to interfere in its relationship with Taiwan.

“If anyone dares to split Taiwan from China, the Chinese military has no choice but to fight at all costs ... the U.S. is indivisible, and so is China. China must be, and will be, reunified.” Wei said.

Nonetheless, Wei said the U.S. and China have both realized that any conflict between the two “would bring disaster to both countries and the world.” The two countries need to keep talking. “Collaboration requires effort from both sides, whereas it only takes one side to start a fight,” the defense minister said.