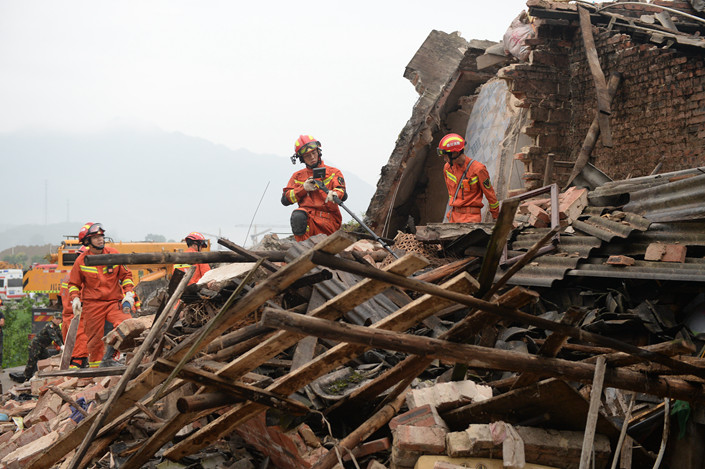 Rescuers work at the scene of a 6.0 magnitude earthquake in Changning county, Yibin, Sichuan province on June 18. Photo: VCG

At least 13 people have been killed and 200 injured by an earthquake and its aftershocks that hit Southwest China’s quake-prone Sichuan province, according to official numbers.

The magnitude 6.0 earthquake was recorded at 10:55 p.m. Monday in Yibin, a city of nearly 4.5 million located about 260 kilometers (161 miles) south of Chengdu, the provincial capital. Since then, at least 77 aftershocks have been recorded, two of which rated above magnitude 5.0.

The early warning network developed by the Chengdu Hi-Tech Disaster Reduction Institute successfully warned residents of the earthquake, which had its epicenter in Yibin’s Changning county. According to the institute, Yibin residents received a warning 10 seconds before the quake hit. The city of Leshan, south of Chengdu, received a 43-second advance warning and Chengdu residents received a 61-second advance warning. The warning came via television, mobile phone and special earthquake warning terminals.

At the time of the quake, a man surnamed Wang was on the third floor of his home in Changning county. He recalled that “the dim sky was shaky” and he was “unable to stand” from a strong feeling that lasted more than 10 seconds. He and his fellow villagers ran out of their houses and fled to safety. Shortly thereafter, the local government sent rescuers for the stranded villagers. The rescue team also searched for people buried by collapsed houses. Wang estimated that hundreds of houses in his village had collapsed during the earthquake and its aftershocks.

A man surnamed Yuan from the same village said he was about to go to sleep when the house began to shake violently. Yuan was used to tremors hitting his village, but this time was different. “After it shook for a while I felt something was wrong. It was much worse than before. People were running outside, and all of the roof tiles fell down.”

Yuan hid in a fortified bathroom before running downstairs. “I dared not go back inside. I ran out of town. Every family got into their cars to seek shelter. There have been aftershocks since last night, and about 80% of the houses couldn’t withstand it.”

The earthquake was not the first to hit Yibin, Yuan said, and the county had invested in disaster prevention measures. Local governments in the area quickly dispatched rescue teams. The city’s residents have been sent to stay in nearby towns and villages.

In the town of Changning, more than 30 kilometers from the epicenter, a man surnamed Li felt the power of the earthquake. He had just returned from delivering a package when the floor and ceiling shook violently for more than 10 seconds. He and his family ran out of the house into an open space. “I was so frightened I didn’t sleep much last night,” he said.

Southwest China has experienced several major earthquakes in recent years. The largest — a magnitude 8.0 quake in 2008 — hit the Sichuan city of Wenchuan, 300 kilometers to the northwest of Yibin, killing nearly 70,000 people.