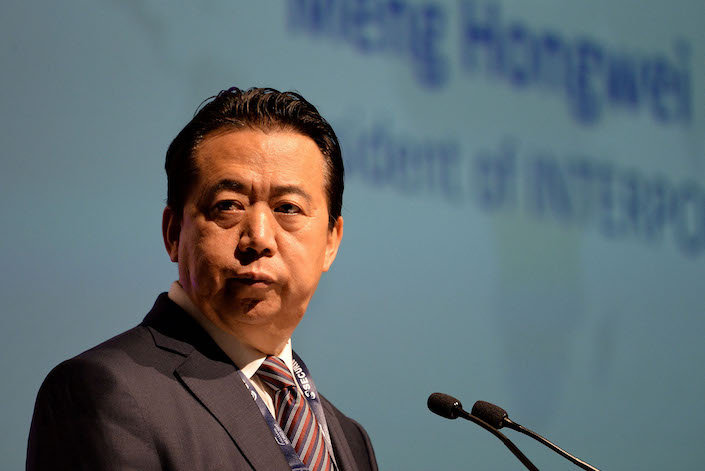 Meng, the first Chinese head of the global law enforcement agency, stood trial at Tianjin No. 1 Intermediate People's Court Thursday, months after he came under investigation. He is one of the highest-ranking officials to fall from grace in China’s sweeping campaign to clean up corruption in government and at state-owned enterprises.

Chinese authorities confirmed in October 2018 that Meng was under investigation for allegedly accepting bribes, days after his wife reported he was missing after a return trip to China from Lyon, France, where Interpol is based.

According to the Tianjin court, Meng was accused of taking the bribes between 2005 and 2017, when he was a vice public security minister and the director of the China Coast Guard. Meng used his power to seek personal gain and accepted payoffs in exchange for business and promotion favors, according to the indictment.

Meng pleaded guilty, and the court said it will pronounce sentence at a later date.

He was appointed president of Interpol in November 2016 and was scheduled to serve until 2020. Interpol coordinates governments of member countries in searching for missing people and fugitives. However, it has no enforcement power to carry out detentions.

On the same day that China’s National Supervision Commission announced the investigation of Meng on Oct. 7, Interpol said it received Meng’s resignation “with immediate effect.”

In a strongly worded statement issued the following day, China’s Ministry of Public Security said Meng “only had himself to blame” for the investigation and called for the “conscientious use of the legal system to regulate and restrict power.”

Meng’s investigation was part of an effort to “thoroughly purge the poisonous influence of Zhou Yongkang,” the statement said, referring to China’s former top security official, who was put under investigation in 2014 on corruption charges and sentenced to life in prison in 2015.

In late March, the official Xinhua News Agency reported that Meng had been expelled from the Communist Party of China and stripped of his administrative positions.

Meng was alleged to have seriously violated party discipline and was found to have a “twisted” understanding of power that led him to disobey party mandates, take bribes, “squander national assets,” and abuse his power to benefit people including his wife.

Meng’s wife, Gao Ge, also known as Grace Meng, was removed from the top political advisory body in Shandong province in January. Public records showed that Gao was elected a member of the Shandong Committee of the Chinese People’s Political Consultative Conference in 2013 and 2018.

Sources close to the matter told Caixin that Gao in 2011 was appointed the deputy chief of the China National Democratic Construction Association’s committee in Qingdao, Shandong province, with “backing from the provincial government.” The National Democratic Construction Association is one of the eight legally recognized political parties in China.