Amazon’s Merchants Are Feeling the Pain of U.S.-China Trade War 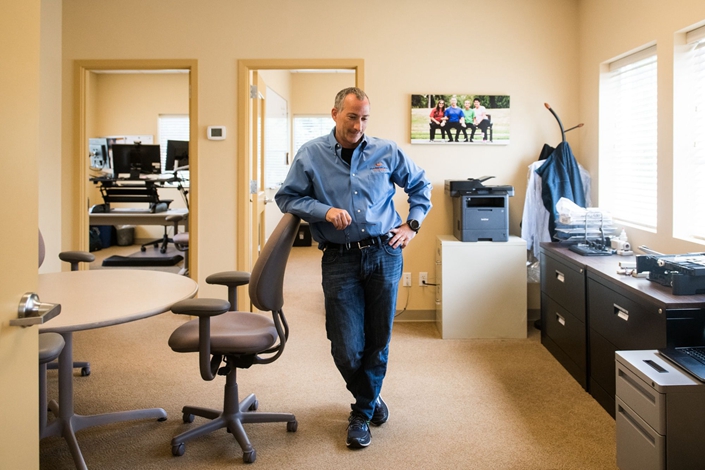 Jerry Kavesh, who sells cowboys boots and hats on Amazon, in Seattle, on Wednesday. Photo: Bloomberg

(Bloomberg) — Over the past several years, Shanghai entrepreneur Yung Lin has built a decent business selling wrenches, screwdrivers and other tools on Amazon.com. Then President Donald Trump imposed tariffs on thousands of goods made in China, and Lin faced a difficult choice: eat the additional cost or try and pass it onto his mostly American customers. He chose to raise prices and watched sales of some products dive by as much as one third in just two weeks.

Amazon.com Inc. merchants around the world are scrambling to navigate an unpredictable trade war that’s upending their proven business model of buying inexpensive goods in China and selling them at a markup in the U.S. The problem is particularly acute now as Trump weighs another $300 billion worth of tariffs, many on consumer goods.

Mom and pop sellers won’t be able to wait for Trump’s decision: They have to place factory orders now and figure out pricing if they want to get their goods made in time for the lucrative Christmas shopping season, when they make as much as half their annual revenue. The most obvious solutions — raising prices, shifting production to other countries, stockpiling inventory — all have costs and complications of their own.

These businesses — many of them one-person shops — are especially vulnerable because they lack big companies’ wherewithal to ride out the uncertainty as well as the negotiating power to shift tariff costs onto their suppliers. “The smaller companies have a significant problem,” says Joel Sutherland, managing director of U.C. San Diego’s Supply Chain Management Institute. “We have an administration that says one thing today and does something else tomorrow, which poses tremendous risks.”

Amazon is more insulated than the merchants in the near term but it too could take a hit if sales slow and cut into the commissions and fees the company charges merchants to use its online store.

Much depends on whether the U.S. and China can come to terms. Trump will meet Chinese President Xi Jinping for the G20 summit in Osaka, Japan, on Friday and Saturday, and both sides have agreed to resume trade talks after a weeks-long stalemate. But even if they hammer out an agreement, the trading relationship between the world’s two largest economies probably will never be the same.

“We’re going to assume the tariffs are here to stay,” says Chuck Gregorich, who sells China-made hammocks, patio furniture and 2,000 other products on Amazon. “We can’t have this happen in a year or two and get caught with our pants down again.”

Like many other importers, Gregorich tried to move up orders early last year to beat a Jan. 1 tariff hike on Chinese imports from 10% to 25%. He wound up spending an extra $400,000 on shipping only to see the tariff hike delayed. Burned once by the guessing game, Gregorich is looking to shift about 30% of his production to factories in Vietnam and elsewhere. He’s not alone. Many other Amazon merchants are considering having their goods made in India, Southeast Asia and Central America.

Michael Michelini relocated to China from New York in 2007 to make Italian coffee presses and upscale bar supplies for U.S shoppers. Eight months ago he decided to move with his wife and kids to Thailand, where he’s working with a new factory to develop a line of high-end kitchenware. “Now when I think of China, I think of risk,” he says.

Moving isn’t easy, however. Merchants say finding the right factory, securing raw materials and conducting product quality testing can easily eat up a year. Jerry Kavesh sells cowboys boots and hats on Amazon and recently spent months locating a factory in India that could make his products. But Kavesh discovered he would still have to import raw materials from China, negating any advantage. So as a last resort, he’s cutting his holiday inventory by about 15% and raising prices by about 12%, which he figures will spook enough customers to hurt sales.

“When I hear the [U.S.] administration say just move, that's just not realistic,” says Kavesh, the chief executive officer of 3P Marketplace Solutions. “You can’t just suddenly turn all of your production over to someone new.”

Even as U.S. sellers try to diversify their manufacturing base, their Chinese counterparts are looking for new customers in Europe, Japan and Australia to offset the potential hit to their U.S. business. “If you are a Chinese seller, money is money,” says Eddie Deng, a former Alibaba Group Holding Ltd. strategist who now runs an online clothing brand called Urbanic that sells Chinese-made, Western-style clothing in India. “It doesn't matter if it's from the U.S., India or the Middle East.”

Amazon has said little publicly about the trade war. It wasn’t among 600 businesses including Walmart and Target that wrote the Trump administration earlier this month seeking an end to the trade war because it’s bad for U.S. shoppers. Amazon is a member of the Internet Association trade group, which signed the letter.

Behind the scenes, Amazon has agreed to pay some vendors up to 10% more for products affected by tariffs, according to two people familiar with the matter. “Companies of all sizes throughout the supply chain are adjusting to increased costs resulting from new tariffs,” Amazon said in an emailed statement. “We’re working closely with vendors to make this adjustment as smooth as possible.”

But that help will apply only to products Amazon buys wholesale and resells itself. The mom and pops that sell directly to consumers on Amazon’s marketplace are on their own.

The hardest part is the uncertainty — the temptation to parse Trump tweets in a mostly vain effort to divine the future. “This could all be a head fake,” says Steve Simonson, who sells Chinese-made home goods and electronics and has been scouting factories in India, Vietnam and Central America. “In two months, this could all go away and all of this time and work will be wasted.”