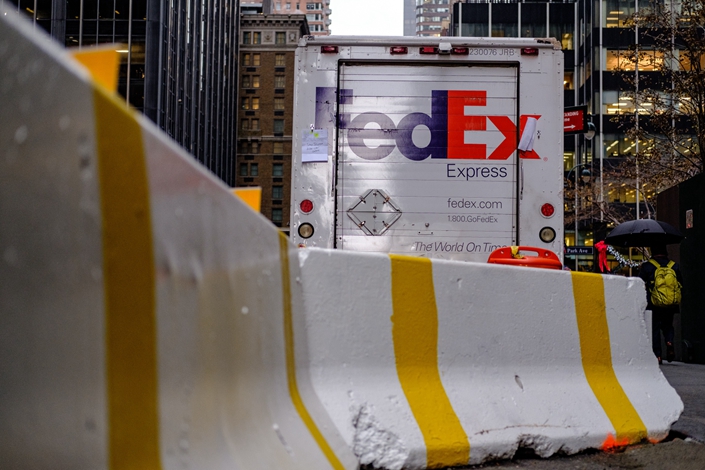 Energy and environment ministers from the Group of 20 economies meet in Karuizawa, central Japan, on June 15, 2019. Photo: VCG

(Bloomberg) — FedEx Corp. rejected a package containing a Huawei Technologies Co. phone being sent from the U.K. to the U.S. in what the mail company says was a mistake, which has elevated beyond routine because of President Donald Trump’s decree in May that limits trade with the Chinese technology company.

The phone was being sent to a PCMag.com phone analyst, who posted a tweet about the package being sent back and containing a label that said FedEx rejected the parcel “due to U.S. government issue with Huawei and the China government.”

FedEx confirmed it was sent back to the shipper, but said the label giving the reason wasn’t from FedEx and probably was written by a third-party handler. The error may have been insignificant if not for the tensions between the U.S. and China after Trump slapped tariffs on Chinese goods and barred selective trade with Huawei on the grounds of protecting U.S. national security. Huawei has said the restrictions may cost it $30 billion of revenue.

The phone wasn’t new and was being sent by a writer for PCMag.com in the UK to Sasha Segan, who writes reviews on phones for the online publication, according to the tweet.

“The package in question was mistakenly returned to the shipper, and we apologize for this operational error,” FedEx said in a statement. “As a global company that moves 15 million shipments each day, we are committed to compliance with all rules and regulations and minimizing impact to our customers as we adjust our operations to comply with a dynamic U.S. regulatory environment.”

Earlier this month, FedEx apologized for delivery errors on Huawei packages following reports that parcels were returned to senders, and China’s biggest tech company said it’s reviewing its relationship with the U.S. delivery service. Two packages containing documents being shipped to the company in China from Japan were diverted to the U.S. without authorization, Reuters reported.

China ratcheted up tensions later by saying it was drawing up a list of “unreliable entities” that harm the interests of Chinese companies.

This latest mistake didn’t involve Huawei directly, but underscores how a complicated U.S. legal decree that took effect in May makes it difficult for FedEx’s thousands of employees who handle millions of packages to know how to interpret the new regulations.

FedEx clarified that it “can accept and transport all Huawei products except for any shipments to listed Huawei entities on the U.S. Entity List.”

United Parcel Service Inc. in an emailed statement said it hasn’t had any unusual issues with the Huawei decree.

“UPS transports packages to Huawei locations worldwide which are not restricted by government policies or laws,” the Atlanta-based courier said in the statement. “UPS follows all applicable laws regarding the import and export of shipments for companies around the world.”