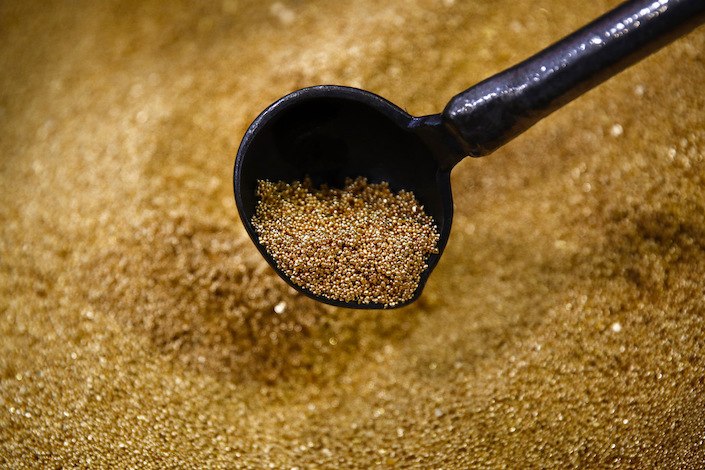 Gold prices have reently surged past $1,400 an ounce for the first time since 2013. Photo: Bloomberg

(Bloomberg) — A consortium led by Fosun International Ltd. is in talks to acquire a majority stake in GV Gold PJSC, a Russian gold miner backed by BlackRock Inc., according to people familiar with the matter.

Fosun is considering teaming up with partners including Zhaojin Mining Industry Co. for a joint offer, the people said, asking not to be identified as the information isn’t public. A deal could value GV Gold at about $1 billion, they said.

GV Gold, controlled by the owners of Moscow-based Lanta-Bank, mines at several Siberian deposits and has almost doubled output since 2016 to 304,000 troy ounces last year. BlackRock owns about 18% of the gold miner after a 2007 deal that valued the company at $500 million.

The miner’s initial public offering plan was stalled last year amid international sanctions and a slump in commodity prices. Even as GV Gold and its owners were not targeted, the value of all Russian assets went down following U.S. penalties.

Gold prices have surged past $1,400 an ounce for the first time since 2013 after the U.S. Federal Reserve indicated a readiness to cut interest rates and following a military encounter between the U.S. and Iran. Enthusiasm for bullion is justified with prices likely to reach $1,500 to $1,600 in the next 12 months under a bullish-case scenario, Citigroup Inc. said last week.

No final decision has been made, and there’s no certainty the talks will lead to an agreement, according to the people. Representatives for Fosun, Zhaojin and GV Gold declined to comment.

The talks with GV Gold, also known as Vysochaishy, would be Fosun’s second attempt to acquire a stake in a Russian gold miner. A group of investors led by the Shanghai-based company agreed to buy 10% of Polyus PJSC for almost $900 million in 2017, but the deal collapsed early last year after the parties failed to agree on a way to wrap up the transaction amid pending approvals from Chinese authorities.

Fosun, led by billionaire Guo Guangchang, is among a few Chinese conglomerates pursuing major overseas deals. Others including HNA Group Co. and Dalian Wanda Group Co. have sold assets in the past two years — a retreat prompted by a government crackdown on debt-fueled acquisitions.

Fosun is also considering a bid for Bayer AG’s animal-health business, people familiar with the matter said last week, while Thomas Cook Group Plc earlier this month said it received an offer from Fosun for its tour-operator business.