Leaders of China, India, Russia to Coordinate on Trade 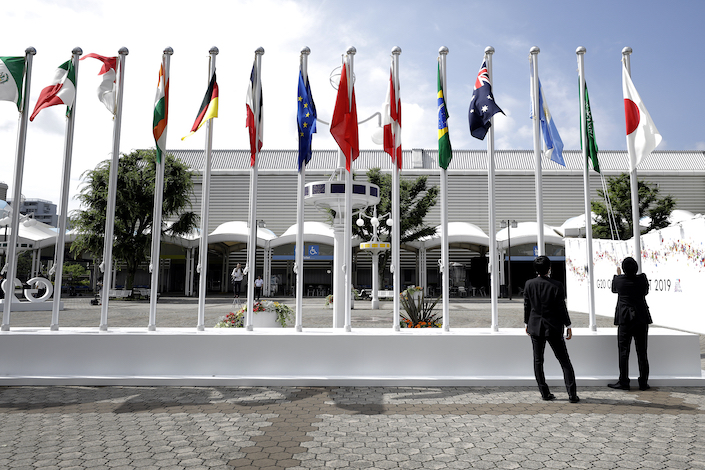 (Osaka, Japan) ― Leaders of China, India and Russia have drawn a coordinated line against protectionism and unilateralism amid an intensifying trade war between China and the U.S.

The agreement grew out of a meeting involving China’s President Xi Jinping, Indian Prime Minister Narendra Modi and Russian President Vladimir Putin Friday on the sidelines of the G-20 meeting in Osaka, Japan.

The three leaders agreed to cooperate on various fronts, including support for “economic globalization and trade linearization,” said Wu Jianghao, an official of the Chinese Foreign Ministry, at a news briefing in Osaka.

The three leaders held a similar trilateral meeting in December when they attended the last G-20 summit in Buenos Aires, Argentina.

The strengthening ties of the major members of BRICS – a bloc of emerging countries that also includes Brazil and South Africa – came as China and the U.S. have been embroiled in a tit-for-tat trade war since last year that has sent ripple effects through the global economy.

Some analysts said this could add pressure on the increasingly inward focus of the Trump Administration, which has also threatened additional import tariffs on major economies like India and Japan.

“The RIC (Russia, India and China) national leaders’ mini-summit at the G-20 marks an upgrade of their decade-long foreign ministers’ trilateral,” said Swaran Singh, a professor in the School of International Studies at Delhi-based Jawaharlal Nehru University.

“The fact that this ‘strategic triangle’ has since 1999 presented shared views on regional and global challenges ― which have been at variance from the U.S. and its friends and allies ― makes this upgrade very timely to face U.S. desertion of its global leadership,” he said.

The cooperation of the three nations can lead to alternative ways to address an oil crisis triggered by Trump’s sanctions on Iran and Venezuela, in which Russia can be a potential supplier for China and India, Singh said.

Separately, China’s Foreign Ministry said Friday that Beijing is keeping in close communications with the U.S. regarding the highly anticipated meeting between President Xi and U.S. President Trump on Saturday.

Xi and Trump are scheduled to meet around noon Saturday on the G-20 sidelines. The meeting has revived hopes that trade talks might be brought back on track after negotiations broke down last month.