Editorial: What China Must Do for Its Capital Markets 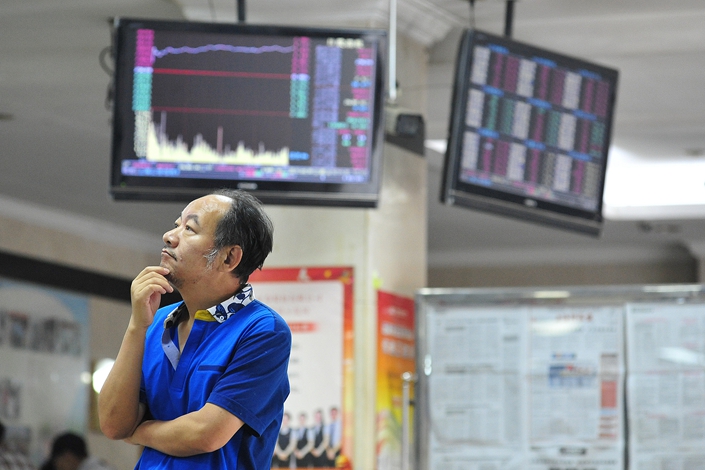 A man keeps an eye on the markets at a securities sales department on Monday in Nanjing, East China’s Jiangsu province. Photo: VCG

As the curtain rises on the Science and Technology Innovation Board, there is a new ray of hope for China’s capital markets. The Chinese version of a report titled Establishing Viable Capital Markets was published this month in Caixin’s Comparative Studies magazine. It is a timely report. The English version of the report was submitted by the Bank for International Settlements’ (BIS) Committee of the Global Financial System (CGFS) working group on building capital markets. Members of the working group come from the central banks of more than 10 countries and regions, including China, the United States, Europe and Japan, as well as the Bank for International Settlements. The report is a masterpiece that examines the experiences of multinational capital market development. What China can learn most urgently from is the content on market autonomy and financial openness. These are the source of vitality for the capital market and are complementary concepts. At present, it is more realistic for China to promote market autonomy through financial openness.

The degree of marketization and openness in China’s financial industry does not match its position as the second-largest economy in the world. The financial restriction index has been at the forefront of G-20 countries for a long time, which places tremendous pressure on the Chinese government in the context of foreign trade and investment negotiations. In recent years, although the pace of opening up in the domestic financial industry has accelerated, it is still a marginal and remedial opening that needs urgent expansion and deepening.

The vitality of the capital market depends mainly on micro-mechanisms, that is, whether the market players are free or not. On the contrary, financial repression interferes with market pricing and capital allocation in various ways. As the report says, the process of easing financial repression started earlier and was basically completed by the mid-1990s in developed economies. In emerging market economies, financial market liberalization occurred a little later, but had a positive impact on the development of capital markets. We can see that in recent years, although the degree of financial repression in China has eased, there is still inertia in the regulatory authorities’ implementation of many aspects, such as in substantive review of initial public offerings by securities regulatory authorities, in intervention of primary market prices, in the artificial control of issuance rhythms, and in exerting influence on secondary market indexes. This “paternalism” not only stifles the vitality of the capital market, but also makes regulation ineffective and corrupt. Advocating for market autonomy and strict supervision are not contradictory. Rather, it takes aim at the arbitrary use of power and suppressing the invisible hand with a visible hand.

There are many reasons for the low vitality of China’s capital market. Opening up belatedly and slowly is an extremely important one. Since the beginning of reform and opening, especially since China’s entry into the WTO, it has been proven that the earlier and more actively that a country opens up, the better the development and the stronger the competitiveness. On the other hand, every effort for protectionism only protects the weak and delicate. Compared with the real economy, the domestic financial industry is far less open, while the securities industry obviously lags behind the banking and insurance industry. It is a “blind spot” in China’s negotiations for WTO accession, and its opening up has faltered in the last 20 years. In particular, the report points out that many larger and wealthier emerging market economies have largely or completely opened up access to local stock and bond markets, but notes that financial markets in China and India remain largely divided, especially bond markets. Nevertheless, India has accelerated the pace of financial openness over the last 15 years. China should have a greater sense of urgency.

At present, there are three kinds of misunderstandings that serious hinder the opening of China’s financial industry, namely the “sufficiency theory,” the “uselessness theory” and the “threat theory.” In the past, the idea that “the wolves are coming” dominated. With the growth of China’s economic strength, the view that the degree of our financial opening has been high enough, and that foreign capital is not indispensable has become more and more influential. This is the result of ignoring global trends and drawing on the narrow interests of particular sectors or industries. In the future expansion of financial opening, we should always be vigilant and try our best to eliminate these three kinds of misunderstandings.

Market autonomy and two-way opening are mutually reinforcing, and both need to be guaranteed through a series of institutional mechanisms. In addition to these, the report puts forward a number of policy recommendations, including improving the legal and judicial system for investor protection, improving the independence and effectiveness of supervision, deepening the domestic institutional investor base, developing complementary markets and improving market infrastructure. All of these opinions are pertinent and deserve attention.

In conclusion, China needs to improve its level of marketization, rule by law, and internationalization; continuously enhance the independence and quality of supervision; improve policy transparency, consistency and continuity; effectively strengthen investor protections, particularly in policy design and implementation; treat domestic and foreign investors equally; and further create an environment of fair competition. In particular, we should listen to the reasonable demands of foreign investors and not just effectively remove barriers to direct investment, but also alleviate their concerns about uncertainties in Chinese laws, regulations, taxes, and market environment in order to attract and retain foreign investment.

At present, the domestic financial opening is still fragmented, and as long as one department raises an objection, an opening measure will struggle to move forward. To this end, the central bank, the China Banking and Insurance Regulatory Commission, the China Securities Regulatory Commission, and other departments should strengthen communication, and higher-level institutions should coordinate as a one. Now the main way to promote the opening up of the financial industry is on a case-by-case basis, like QDII, QFII, the stock links between Hong Kong and both Shanghai, and the bond links. We need a top-level design. In management, regulatory commissions still hold on to the positive list and urgently need to transition to the negative list.

The most enlightening things in the report are the suggestions to fully respect market autonomy while promoting the two-way opening of market reform. The main measure of their progress is not words in documents or the speeches of officials, as there is often a big gap between promises on paper and their actual effect. The personal feelings of market participants at home and abroad cannot be feigned, and the international comparison of various indices even more irrefutable. China’s economy has shifted from manufacturing to services, and the financial industry shoulders a heavy responsibility. The securities industry has gone through many rounds of “financial cycles” of hope and disillusionment, and the public is eager to see that “this time is different,” hoping that the accumulated experience of the high-tech board can bring endless vitality to China’s capital market.