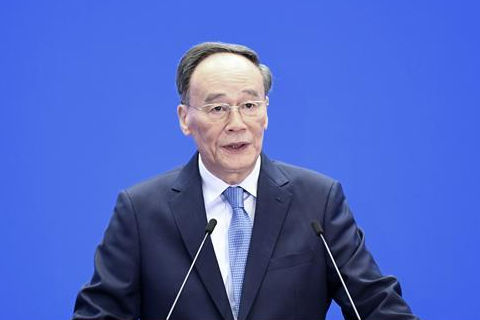 Vice President Wang Qishan slammed protectionism at a forum on world peace Monday in Beijing, saying the global security should instead be achieved by working together to build a more open world economy.

Wang made the remarks after China and the U.S. reached a ceasefire in late June to their ongoing trade war, which had escalated in recent months. Still, it remains uncertain whether the two sides will be able to negotiate a deal to ease tensions.

“Development is the key to solving all problems,” Wang said in a speech at the 8th World Peace Forum in Beijing. “We should strengthen dialogue and cooperation on the economy, finance, technology, energy and other areas in order to take the world economy to a new level of openness and to strengthen joint security through shared interests.”

He added that China is opposed to protectionism in the name of national security.

He did not name any country in his speech. But China has criticized the U.S. for starting the trade war and using security as a pretext to stifle technological competition from Chinese companies. China’s telecommunication giant Huawei Technology Co. Ltd., for instance, teetered on the edge of crisis after the U.S. decided to cut off access to its American component suppliers.

Wang said China stands for preserving multilateralism with the United Nations at the core, and respect for each country’s sovereignty and territorial integrity. “The existing international system is not perfect; it needs to be reformed, but not scrapped,” Wang said.

He said China’s policy on peaceful development is to “develop itself through preserving world peace, and to preserve world peace through its own development.”

Wang reiterated China’s commitment to peace. “No matter how developed China is, it will never seek hegemony — never seek expansion or a sphere of power,” he said.

More than 100 former government leaders and senior scholars from all over the world attended the forum at Tsinghua University.