Chart of the Day: Moutai Ranked as One of World’s Top Consumer Brands 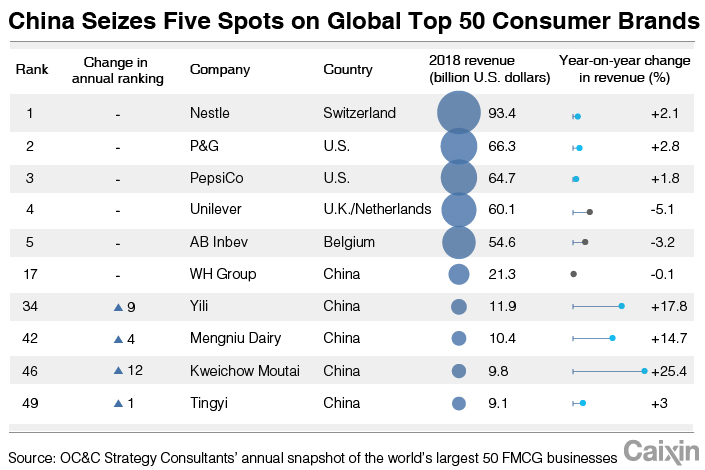 Though the appeal of its fiery liquor has yet to win over many drinkers beyond China’s borders, Kweichow Moutai is a force to be reckoned with, according to an annual survey of the top consumer brands released Monday.

“Our research has identified five standout FMCG businesses: Coca Cola, Estée Lauder, Yili, Kweichow Moutai and Shiseido that have outperformed their peers,” said Will Hayllar, U.K. managing partner at OC&C, in a statement.

“All five are united in having identified fast growing consumer markets and acted to serve them. Coca Cola and Yili won the health-conscious crowds, Estée Lauder and Shiseido won over online millennials, and Kweichow Moutai quenched the Chinese thirst for premium spirits,” Hayllar said.

Taking its name from its picturesque hometown of Maotai, the namesake company produces a grain alcohol called “baijiu” (“white wine” in Chinese) and is said to have been the favorite brand of Mao Zedong. The Shanghai-listed firm has retained its title as the world’s largest liquor company since early 2017, when its market capitalization exceeded that of British booze giant Diageo PLC. Its market cap is now around 1.14 trillion yuan ($165 billion).

Now in its 17th year, the Global 50 is compiled based on information extracted from each business’ financial reports. OC&C is a strategy consulting firm based in the U.K.