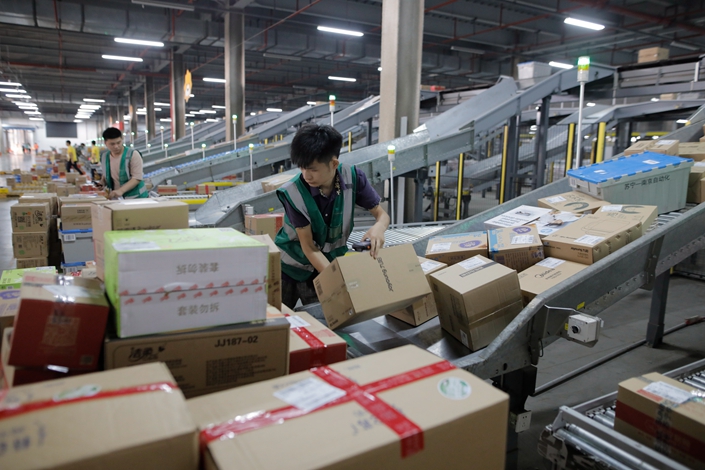 The fundraising scandal engulfing entertainment-to-health care conglomerate Camsing Global LLC has shone a spotlight on the activities of e-commerce giant Suning.com, with documents obtained by Caixin suggesting the retailer may have been inflating its sales figures by round-tripping shipments through a company with links to Camsing’s chairwoman, Lo Ching.

Contracts seen by Caixin show a series of purchases and sales between a wholesaler, one of its suppliers, and Suning, a brick-and-mortar retailer that has expanded rapidly into online selling in the past few years. The wholesaler, Guangdong Kangan Trade Co. Ltd., is linked to an investment consulting firm that issued asset management products that were partly guaranteed by Camsing and Lo herself, who is also known by her English name Vivian. She was detained in Shanghai on June 20, according to a filing to the Shanghai Stock Exchange by Jiangsu Boxin Investing & Holdings Co. Ltd., a company controlled by her.

Documents obtained by Caixin show that Guangdong Kangan, a wholesaler and import-export trader based in Guangzhou, signed two contracts worth a total of 117.6 million yuan ($17.1 million) to buy goods from Hangzhou Chenghe Supply Chain Management Co. Ltd., one of its suppliers, in January. Some of the goods were to be sold to Suning and shipped directly to Suning’s distribution warehouse in Nanjing by delivery company Best Express, according to the contracts and consignment notes, or delivery documents, obtained by Caixin.

However, a spokesperson for Best Express told Caixin that the consignment notes were fake, and the person who answered the contact phone number for the delivery firm given on the notes denied he worked for the delivery company.

Caixin’s inability to verify the deliveries suggests there were no real purchases and that the invoices were part of a continuous loop of buying and selling between Suning, Kangan and Chenghe that served to inflate the retailer’s gross merchandise volume (GMV), a metric used by the e-commerce sector to show the total value of goods sold through an online marketplace or platform.

The documents suggest that Suning is buying goods from Kangan and Camsing, and is also selling goods to Chenghe which also sells to Kangan.

Zhu Zhangyue, Chenghe’s legal representative, told Caixin that Chenghe has been buying goods from Suning for several years, but he declined to name the companies Chenghe is selling to.

Suning did not respond to Caixin’s request for comment on its contracts with Chenghe.

The practice of faking or inflating sales figures, even among big players such as JD.com and Suning, is an open secret in the e-commerce industry, several people familiar with the matter told Caixin. Analysts and investors use GMV as a key metric to value e-commerce companies, and companies are under pressure to report strong growth in the metric, especially during major online promotions such as Singles Day.

Suning has been thrust into the limelight after New York-listed Noah Holdings Ltd., one of China’s biggest wealth management companies, accused Camsing of fraud in connection with 3.4 billion yuan of asset management products one of the conglomerate’s affiliates issued that were backed by accounts receivable, money owed to it by its customers, in this case from JD.com.

The scandal and the detention of Camsing’s chairwoman sent jitters through the industry, as many asset management companies had exposure to asset management products backed by Camsing’s accounts receivable related to its business with other companies.

Yunnan International Trust Co. Ltd., a company based in southwest China that offers asset management, trust and investment banking services to institutions, acted as a trustee for products that were backed by Camsing’s accounts receivable and guaranteed by Lo, according to a statement released to the media. It reported the matter to the police and to the regulators. The firm has engaged lawyers to begin enforcement proceedings and to pursue those who raised the financing and the guarantor to fulfill their repayment obligations, it said.

A source at the company who declined to be identified told Caixin that Yunnan International Trust started doing business with Camsing and Kangan in 2018, and that it had issued asset management products backed by accounts receivable related to Camsing’s business with Suning and guaranteed by Lo. Around 1 billion yuan of the products are outstanding, the person said.

However, a spokesperson for Suning told Caixin that it had no involvement with these products and that the accounts receivable with Suning that backed the products were fake.

An earlier version of this story gave the incorrect date and attribution for Lo Ching’s detention. She was detained on June 20, according to a filing to the Shanghai Stock Exchange.