China’s Exports and Imports Drop in June in Wake of New U.S. Tariffs 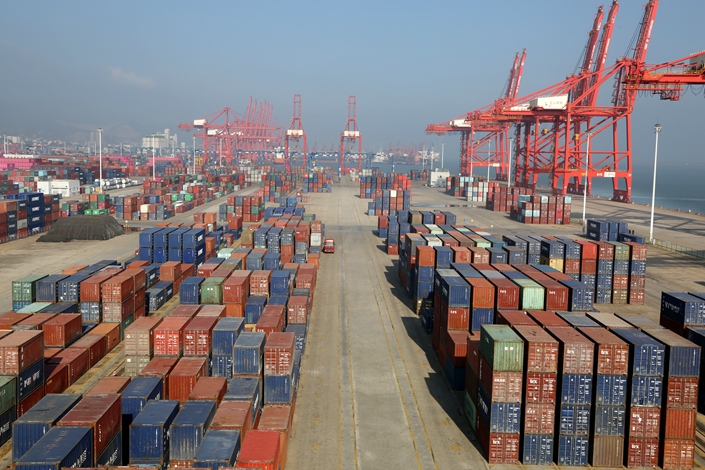 Stacks of containers bound for overseas sit at a port in East China’s Jiangsu province on June 10. Photo: IC Photo

China’s exports and imports of goods both declined year-on-year in June, though its trade surplus rose to a new high for 2019, official data showed Friday.

Exports edged down 1.3% to $212.8 billion last month, according to data (link in Chinese) from the General Administration of Customs. That’s down from a 1.1% increase in the month before, but less severe than the median forecast of a 1.4% slide forecast by a Bloomberg poll of economists.

Imports declined 7.3% year-on-year to $161.9 billion, the data show, compared with an 8.5% drop in the previous month. The Bloomberg poll of economists forecast a decrease of 4.6%.

China’s trade surplus further expanded to $51 billion in June, up from $41.7 billion the month before and $13.7 billion in April.

The latest U.S. tariff hike in May probably contributed to the drop in exports, alongside a broader slowdown in foreign demand, research firm Capital Economics said in a note, adding that imports were probably hit by “a renewed domestic slowdown.”

The U.S. government has imposed punitive tariffs on $250 billion of Chinese goods over the past year, prompting Beijing to retaliate.

Since the start of the trade war, the U.S. has argued that the two countries have a trade imbalance, and demanded China make structural changes involving forced technology transfer, intellectual property protection and market entry barriers for foreign companies. China has played down the imbalance, blaming disparities in accounting, trade structure and restrictions imposed by Washington on certain exports, arguing that the U.S. has benefited from bilateral trade.

The trade situation in the first half of this year was steady and showed resilience, Li Kuiwen, spokesman for the General Administration of Customs, said at a press conference Friday.

In the first half, private domestic firms contributed 41.7% of the value of China’s total exports and imports, replacing foreign companies as the biggest contributor, Li said. Private domestic companies accounted for 50.6% of the country’s export value in the same period, the first time this figure has come in above 50%, he added.