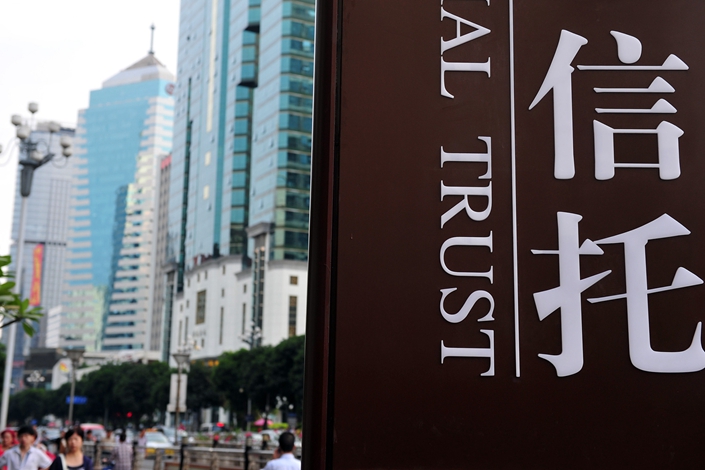 Several trust firm managers summoned to meet with financial regulators said they were ordered to put an end to any illegal funding to property developers, such as lending to developers before they obtain land-use permits. Photo: VCG

Financial regulators have instructed 12 more trust companies to keep their investments in real estate in check and stop illegally funding developers, in an effort to stave off speculation in the rebounding property market.

The widening clampdown on trust financing of real estate projects is a sign of regulators’ unease that the rapid growth in a key source of early funding for the industry might be exacerbating risks in the market.

The 12 trust companies come on top of 10 others that were summoned to meet with China’s banking regulator on July 3. At that initial meeting, the China Banking and Insurance Regulatory Commission (CBIRC) instructed the trust companies to control growth in their real estate financing businesses. Later in the month, the CBIRC’s Beijing office separately issued the same instructions to 12 more trust companies.

Of the 22 firms, several were asked to make sure there was no growth in the outstanding amount of their real estate investments at the end of the third quarter compared with the preceding quarter. Others were asked to slow the expansion in such business.

On July 6, a CBIRC official said at a press briefing that the initial meeting aimed to curb speculation in the real estate market. The official said there were compliance problems and potential risks behind the rapid growth of some trust companies’ real estate financing businesses.

Some trust company managers who attended the meetings with either the CBIRC or with its Beijing office told Caixin that regulators also ordered all of the trust firms to put an end to any illegal funding to property developers, such as lending to developers before they obtain land-use permits.

At the end of May, China’s trust companies’ outstanding investments in real estate totaled 3.15 trillion yuan ($458.23 billion), up 15.15% year-on-year and accounting for 14% of their total investments, according to CBIRC data.

A midlevel bank manager told Caixin that the investor refunds will damage developers’ ability to get financing and could have ripple effects through the financial system.

Although money from trust companies constitutes a small portion of developers’ financing, it’s an important source of funding for real estate projects early in their development, said Zhou Guannan, an analyst of Huachuang Securities Co. Ltd.

The real estate market in China has been on a rebound since the beginning of this year. In the first half of 2019, the average land premium rate, which measures the price hike after the land auction, in 300 major cities was around 20%, said Zhang Yu, an analyst with investment bank China International Capital Corp. Ltd. Rising land prices have boosted expectations that home prices will rise, exacerbating concerns of a bubble forming in the market.