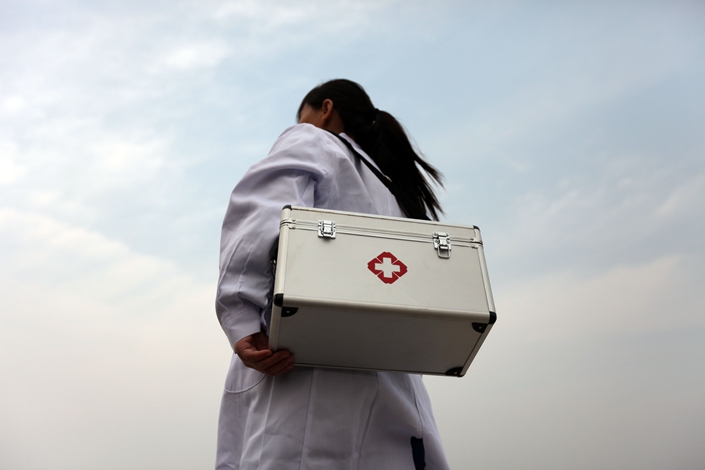 Multiple doctors in Yilan told Caixin that they and their colleagues had failed for months to get the money they spent on locals' medical insurance back from the authorities. Photo: IC Photo

Doctors in Yilan county said in a joint resignation letter that rural doctors each had to foot the bill for up to tens of thousands of yuan worth of medical insurance subsidies on behalf of the local authorities for villagers in 2018, and that the full sum had never been paid back, Caixin learned. Additionally, they shouldered heavy workloads despite having a lower status and fewer rights than public hospital doctors, the rural doctors said.

One doctor who had gone to submit his resignation to the Yilan health committee on Sunday, and who published a post online about the situation, has now been detained by local security officials, another rural doctor told Caixin.

The resignations come after a similar wave of departures in the central Chinese province of Henan, where rural doctors said the local government had failed to deliver on promised health care subsidies.

China’s village doctor system originated as the “barefoot doctor” program of the 1960s, which involved giving some villagers basic medical training in order to make up for the serious shortage of health care providers in rural areas. These villagers, who are licensed to practice only within certain parts of the country, are now officially known as rural doctors, but their level of training and income fall short of what officially licensed doctors receive.

Rural residents in China receive medical coverage under the New Rural Cooperative Medical Scheme, a program introduced in 2003 to provide a rural alternative to the Urban Employee Basic Medical Insurance Scheme, which was rolled out in the 1990s and only applied to retired and working city-dwellers.

Multiple doctors in Yilan told Caixin that they and their colleagues had failed for months to get back from local authorities the money that the doctors had initially paid for residents’ medical insurance throughout 2018. Finally, in May, the county medical insurance bureau said it would pay the doctors a total of 600,000 yuan ($87,280), far less than the 16 million yuan they demanded.

Yilan’s county health committee told Caixin it was “unaware of the situation,” while other sources said provincial and Harbin city authorities have dispatched personnel to investigate the matter. Yilan is under the administration of Harbin.