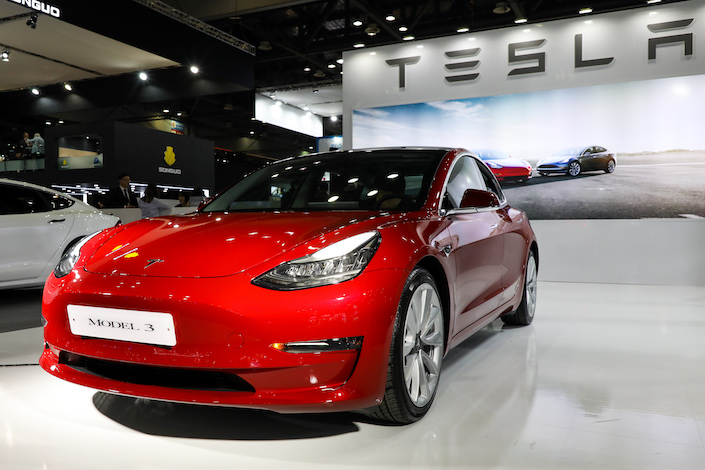 Tesla Inc. cut the starting price of the Model 3 sedan in the U.S. weeks after a federal tax credit shrank in half, renewing concern over whether the electric-car maker can sustain sales with less support from incentives.

The Model 3 now starts at $38,990, according to Tesla’s website. Arndt Ellinghorst, an analyst at Evercore ISI, wrote in a report Tuesday that the halving of the U.S. tax credit to $1,875 at the beginning of July is causing the company to reduce prices to support demand.

“The key question remains — will Tesla be able to sustain itself given steadily declining ASPs and worsening mix?” Ellinghorst wrote, referring to the average selling prices of the company’s vehicles dropping as the Model 3 becomes a greater share of deliveries.

Tesla shares fell as much as 2.2% to $247.93 shortly after the start of regular trading Tuesday. The stock was down 24% this year through Monday’s close.

While the starting price of the Model 3 has dropped, Tesla’s moves to simplify its lineup include dropping a standard-range version of its larger and more expensive Model S sedan. The cheapest version available is now $79,990, according to the company’s website.

The changes won’t affect prices of Model 3s that will be produced near Shanghai, according to the representative. Tesla is expecting to begin output at a factory there later this year.

Tesla is adjusting prices “in order to continue to improve affordability for customers,” the Chinese unit said in a statement. “We are standardizing our global vehicle lineup and streamlining the number of trim packages offered for Model S, Model X and Model 3.”

Related: Nio Stalls in Its Quest to Become China’s Tesla
Share this article
Open WeChat and scan the QR code