By Qin Jianhang and Isabelle Li 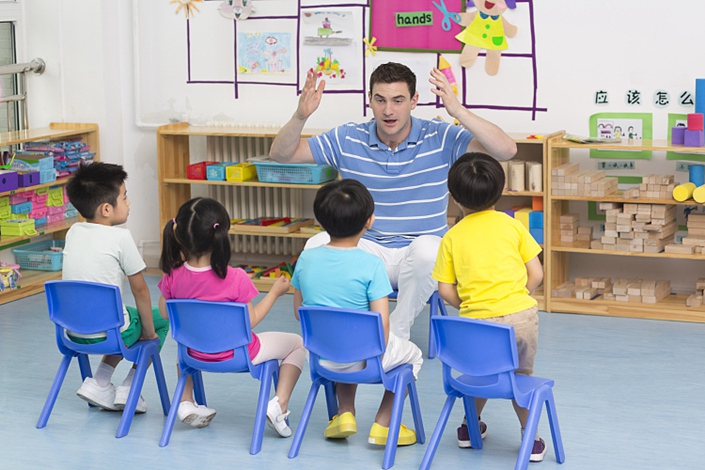 Helping foreigners get visas and find work as kindergarten teachers without proper qualifications has grown into a well-organized business in China. Photo: VCG

Less than a week after seven foreign teachers were detained in eastern China, three Chinese agents were sentenced to prison for arranging kindergarten teaching jobs for unqualified foreigners, a Beijing court ruled Tuesday.

Beijing No.3 Intermediate People’s Court upheld an earlier ruling that sentenced 35-year-old Liu Lijuan, who ran the dodgy agency, to two years in prison and fined her 10,000 yuan ($1,454) according to the court’s ruling. The court also gave two other women who worked for Liu separate prison sentences of 21 months and 18 months. It also fined each of the two women 5,000 yuan.

Police arrested the three women in late 2017 for helping several foreigners, including two Ukrainian citizens, enter the Chinese mainland on student or business visas obtained with fabricated information. Working with a foreign contact, the three women helped foreigners obtain long-term visas and positions as English teachers at kindergartens in Beijing, even though their native language was Russian, according to court documents detailing the ruling.

A district court in Beijing’s Chaoyang district initially ruled against the women, but they appealed.

Helping foreigners get visas and find work as kindergarten teachers without proper qualifications has grown into a well-organized business in China that resembles an industrial chain. It provides expatriates with specific training at every point along the way, including recruitment, interviewing, visa placement, and school placement, Caixin has learnt. It even provides guidance on how to deal with police inspections.

In her testimony, Liu said that after their agency published the recruitment information online, foreigners who were interested would reach out to them. Interviews and training followed. The agents would then introduce them to kindergartens that needed teachers with a foreign look.

“I was aware that foreigners need certain qualifications and work visas to legally work in China,” Liu said. “There is a lot of demand in the market, and that’s why we hired these foreigners on nonwork visas.”

Caixin has learned through investigation that the company profited mainly from the gap between the monthly pay it provided to the foreigner teachers and the salary that the kindergartens paid it. In order to expand its recruitment of foreign teachers, the company also offered incentives to employees, who could earn bonuses or commission for every foreigner they introduced. “Our company worked with around 30 kindergartens (in Beijing), and had introduced around 80 people to them,” one of the defendants said.