Photo Essay: Armed With a Lamp, a Researcher Wages War on the Fall Armyworm

Text and photos by Chen Liang 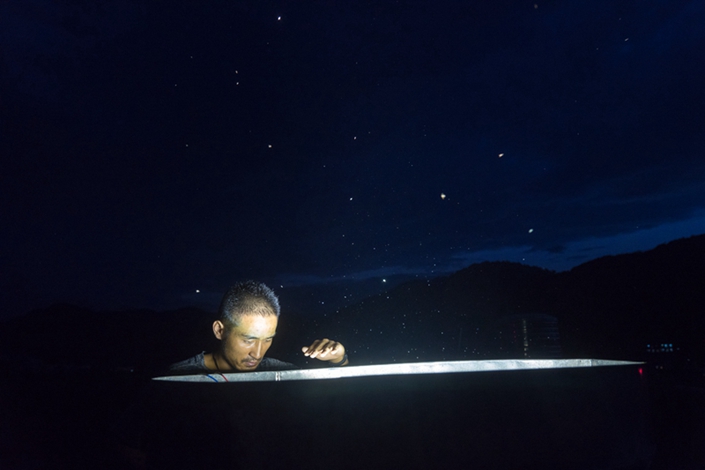 July 1. Dr. Zhao Shengyuan of the Chinese Academy of Agricultural Sciences has been monitoring the status of the armyworm moth invasion for six months.

This year, for the first time, fall armyworm moths migrated from Southeast Asia into China. They came in January through the southwest province of Yunnan, spreading rapidly northward, and now pose a serious threat to China’s food and agriculture production. The tropical and subtropical climates of Hainan, Guangdong, Yunnan, Fujian, Sichuan, and Guizhou provinces, and the Guangxi Zhuang and Tibet autonomous regions, have provided ideal conditions for the annual breeding cycle of the invasive pest.

Dr. Lü Lihua of the Guangdong Province Academy of Social Sciences, who is also a member of a national committee on invasive species monitoring and risk assessment, believes it will take a long time to root them out. When the caterpillar, which is the larval stage of the armyworm moth, first moved into China, it was “invasive.” Now, it is slowly adapting. The battle against the moth is beginning to look more like a war.

Dafu township in Yunnan sits at the foot of Jade Dragon Snow Mountain. A dammed area surrounded by mountains is a great spot for growing maize. But this year, the mountains failed to prevent an invasion of armyworm moths from the grasslands.

In Long Zhezhong’s cornfields near Peiliang village, corncobs lie chewed and broken. Inside one is a dead armyworm, killed with pricey pesticide. “Even after spraying the pesticide, a few days later the pests were back again,” Long said. “Each time the pesticide cost 100 yuan ($14.5) — it was expensive to fight them.”

The crops here are irrigated by the mountain’s meltwater. “Corn grows at different times in the mountains, meaning the prevention window is also different. The moths can fly. We need to do effective prevention and control but minimize the use of pesticides. It’s high pressure work,” said Yang Chunzhen of the Lijiang city plant protection station.

Due to the different growing periods and needs in this mountainous area, differing costs and benefits, insufficient awareness of invasive pests, and high chances of farmers abandoning treatment, prevention and control is much more difficult. To fight this, the 294 counties, towns and villages of Lijiang city have established four WeChat groups to share information, conducted more than 16,500 training sessions, and distributed 63,100 information leaflets and 200,000 bags and bottles of pesticide.

Light traps on the Yunnan border

As of July, Dr. Zhao Shengyuan of the Chinese Academy of Social Sciences had spent six months stationed in a makeshift laboratory in what was previously a defunct karaoke bar in Yunnan’s Baozang town — where the first armyworm moth was discovered.

The moth originated in the Americas and invaded Africa in 2016. Once it spread to India in 2018, Wu Kongming of the Chinese Academy of Social Sciences recognized the potential threat the species could pose to China and began to study it.

Once the moth was found, the academy built a research center to track the moth in the grasslands and set a light trap that had a range of 800 meters. Zhao was in charge of the station.

The daily work there is threefold: turn on the light trap, inspect the fields, and analyze and sort the insects.

The light trap is a high-temperature lamp that attracts insects at night. The light burns and kills the insect with a burst of gray-white smoke, and it falls into a box below the lamp. Zhao turns the lamp on before night falls and then checks the boxes before he goes to sleep to work out if he needs to wake up during the night to change them. The next morning, he removes the full insect traps and goes to inspect the fields for larvae.

In the afternoon, Zhao and his assistants sort and analyze the dead insects. That’s the most difficult task. Sometimes they’re so burned by the lamp that it’s nearly impossible to tell what kind of moth they are. Zhao dissects them to determine the species, as well as if they’re male or female.

Each night from the end of May to early June, the lamp caught about 20,000 to 30,000 insects of more than 200 kinds. Depending on the total amount, only a quarter or an eighth of the insects can be selected, sorted, and cataloged. During that period, 300 to 400 adult armyworm moths were caught every day with a 1.5 to 1 ratio of male to female. This was the peak invasion of the armyworm moth in the grasslands, the researchers concluded.

Monitoring the migration allows farmers across China to time their planting periods in order to reduce the damage done by the pests. It also lets them choose when to use pesticides — if they spray their crops early enough during the invasion, it’s far more effective and lowers their overall costs.

Wu has also set up an insect monitoring station on the border between China and Myanmar. It tracks the density, speed, and direction of inbound insects using electromagnetic waves, providing even more data.

Zhao and his colleagues plan to install remote-controls for the monitoring lights to save on manpower costs. If successful, more lights can be set up, meaning he won’t have to get up in the middle of the night to check the traps.