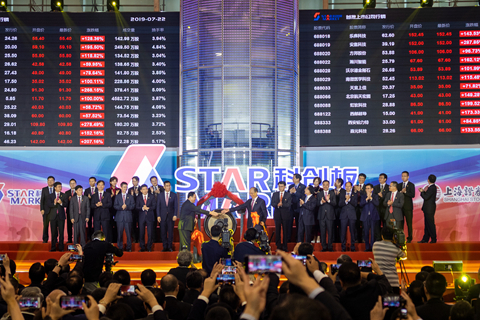 China’s new STAR board debuts on a roller-coaster ride, sending average values of the 25 stocks up 140%. Photo: VCG

China’s new Nasdaq-style high-tech board took off Monday on a roller-coaster ride, with all 25 currently listed stocks surging from their initial public offering (IPO) prices despite several slumping after much-higher opening prices.

The 25 stocks closed up an average of nearly 140% from their IPO prices. Anji Microelectronics Technology (Shanghai) Co. Ltd., a manufacturer of semiconductor products, performed best, ending the debut day up more than 400% from its IPO price after paring gains of more than 520% in the morning.

The so-called STAR board also created the first company with a market capitalization of more than 100 billion yuan ($14.5 billion) on the first day. Shares of China Railway Signal & Communication Group, the only state-owned enterprise so far listed on new board, more than doubled on its debut, pushing its market cap to 129.9 billion yuan. It also led trading volume among all stocks with 97.6 billion yuan of shares changing hands.

The trading was volatile, with all but one of the 25 stocks swinging by more than 100% during the session. Anji Microelectronics had the biggest swing of 340% between its high at 243.20 yuan and low at 110 yuan.

Twenty-two stocks triggered a circuit breaker that causes trading to be automatically suspended for 10 minutes. Fourteen stocks paused trading after rising 30% from their opening price and eight were paused after falling 30%.

Unlike China’s other boards, the STAR high-tech board has no daily limits in place for the first five days that each stock trades. After five days, the daily limit will be set at a gain or a drop of 20% for the new board. On other boards, the current cap on share-price fluctuations on the first day of trading is 44% and subsequently 10% a day.

Five minutes after the opening bell, shares of Zhejiang Hangke Technology Inc., a lithium-ion battery maker, triggered the circuit breaker after surging 30%. Then three minutes later, computer vision software provider ArcSoft Corp.’s stock was suspended after it plunged by 30% from the opening price.

Six stocks were halted twice during the session, including some of the best performers, such as Anji Microelectronics, Western Superconducting and China Railway Signal.

The goal of unlimited price changes for the first five days is to allow prices to line up with market assessments based on free trading, said Zheng Hong, chief investment consultant of LC Securities. The volatility and suspensions on the first day trading were normal, and overall performance of the 25 stocks was within expectations, he said.

All of the 25 stocks closed down from session highs, meaning some investors were locked in at the top.

Some of the best performers also had the highest turnover ratio. More than 80% of Anji’s and Western Superconducting’s shares changed hands on the first day.

The high turnover ratio means nobody was willing to hold the stocks long-term, signaling there is a significant debate on the valuation of the stocks, said Kang Shuiyue, chief investment officer at Danyang Investment Group.

The high-tech board, proposed by President Xi Jinping in November, is designed to improve the Chinese mainland market’s appeal to technology companies and encourage them to list at home rather than abroad. A key change is the shift to a market-based registration system for new listings that is intended to resolve the shortcomings of the current lengthy, bureaucratic initial public offering process on mainland boards.

There are more than 100 applicants waiting in line for listing on the new board, data from the Shanghai Stock Exchange shows.