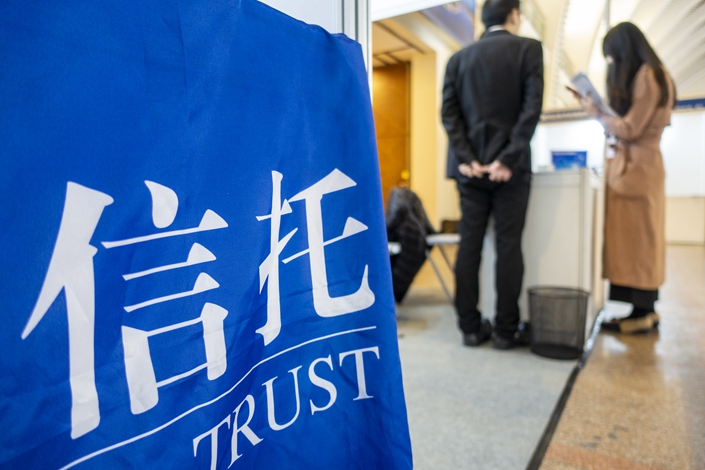 Little is known about the specific operations of China Trust Protection Fund Co. Ltd. and its bailout fund, and it has been the subject of some controversy. Photo: VCG

Government takeovers of two troubled financial institutions — regional lender Baoshang Bank Co. Ltd. and Anbang Insurance Group Co. Ltd. — have tested the mettle of China’s regulators and the system of safety nets built up over the past decade to protect the financial system from potentially destabilising shocks.

Rarely used components of that institutional framework have been thrust into the spotlight by the seizures, namely the four bailout funds covering the main parts of the financial sector — banking, insurance, trusts and securities. These funds provide financing to distressed companies, prevent their financial problems from spilling over into other companies and other parts of the financial system, and compensate customers, investors and counterparties who have lost money.

When Baoshang Bank, a small regional lender controlled by secretive financial conglomerate Tomorrow Holding, was taken over in May, it wasn’t just depositors who were at risk of losing their money. Companies and other financial institutions who had made loans to the bank or who had bought its wealth management products were also faced with potential losses and a squeeze on their liquidity as they couldn’t get their money back.

One such company was China Minsheng Trust Co. Ltd., a Beijing-based trust company that sells wealth management products to affluent individuals and financial institutions, and provides loans to companies. It applied for 700 million yuan ($101.7 million) of liquidity support from the China Trust Protection Fund Co. Ltd. (CTPFC), the state-backed bailout fund for trust companies, just days after regulators took over Baoshang. The application, revealed in a stock exchange filing made by Minsheng’s controlling shareholder, Shenzhen-listed Oceanwide Holdings Co. Ltd., on May 30, fueled concerns that the trust company was affected by the bank’s problems.

Minsheng Trust told Caixin that there’s nothing unusual about its request for support. An official who declined to be identified said this is normal practice in the industry and shouldn’t be overinterpreted.

Here are four things you need to know about the CTPFC.

What does the CTPFC do?

CTPFC was set up in December 2014 with registered capital of 11.5 billion yuan, and awarded its license in January 2015. Its mandate is to prevent, resolve and defuse risks in the trust industry.

CTPFC operates a bailout fund which is funded through mandatory contributions from trust companies. It provides short-term liquidity to members who need it, basically what amounts to a bank loan, using its own capital and credit it obtains from other banks. It also rescues trust companies in trouble, although it has yet to be called on to carry out a corporate restructuring or reorganization. But it does not directly protect investors who buy trust products.

How does the CTPFC help trust companies?

The CTPFC is not as open and transparent as the funds run by the banking and insurance sectors, industry insiders have told Caixin. Little is known about the specific operations of the company and its bailout fund, and it has been the subject of some controversy.

We do know that the CTPFC uses its own shareholder capital and bank loans to offer short-term liquidity support to trust companies. China has 68 officially licensed trust companies and the CTPFC has business relationships with 62 of them, Caixin has learnt. At the end of 2018, Shanghai-listed Anxin Trust Co. Ltd. owed the company 3.3 billion yuan, according to its annual report, while Shenzhen-listed Shaanxi International Trust Co. Ltd. owed 1.25 billion yuan, according to their annual reports.

The CTPFC has created its own credit ratings system to evaluate trust companies, and those ratings govern the amount of liquidity support that can be offered and the interest rate to be paid. Companies who want to borrow money have to offer guarantees or collateral. Caixin has learned that the 700 million yuan borrowed by Minsheng Trust carried an interest rate of 6.3%.

The CTPFC also uses its own capital to buy trust companies’ assets and property and at the end of April its purchases had amounted to almost 55 billion yuan. So far, it has bought up more than 30 billion yuan of assets from its members, including assets that have become non-performing, sources close to the company have told Caixin. Under the guidance of regulatory authorities, the CTPFC is now exploring ways to cooperate with asset management companies in dealing with their soured assets.

However, questions have been raised over the CTPFC’s activities. It barely touches the bailout fund and yet runs a lending business with its own capital, an executive from a trust company said. The CTPFC seems to be taking advantage of its semi-regulatory status to run a commercial business and it’s unclear just how effective its protection is, the executive said.

How big is the bailout fund?

China has 68 registered trust companies and all of them have to contribute to the bailout fund. The CTPFC and the China Trustee Association, the industry’s state-backed self-regulatory body, are responsible for ensuring contributions are paid. At the end of April, the fund reported nearly 142 billion yuan in its coffers. That’s the largest among the four protection funds set up for the different segments of the financial industry — the other funds are the deposit insurance fund for the banking sector, the insurance security fund for the insurance sector, and the securities investor protection fund.

How often has it been used?

Since it was set up, the CTPFC has preferred to use its own capital to help trust companies because they are seeking short-term liquidity support rather than a big bailout. As they have relatively restricted channels to raise short-term money, it’s more convenient to approach the CTPFC if they are short of funds, a manager at one trust company told Caixin.

A previous version of this story inaccurately described China Trust Protection Fund's relationship with the state. It is a state-backed bailout fund.