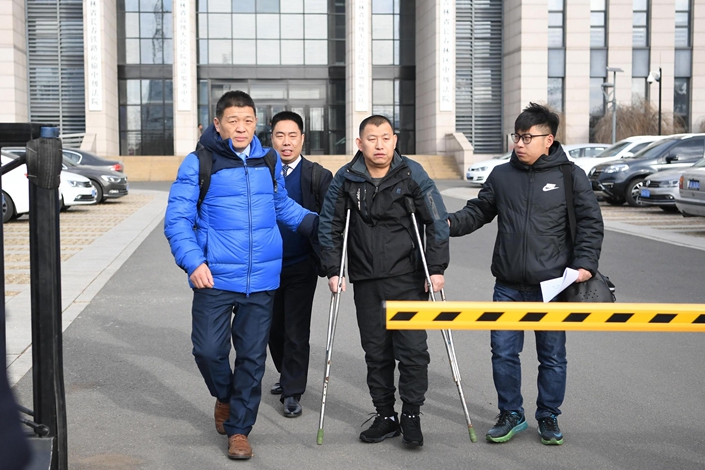 Lawyer Li Jinxing (left) accompanies his client Jin Zhehong (center) out of a courthouse on Nov. 30 in Changchun, Northeast China's Jilin province. Jin was wrongly convicted of murder and exonerated in 2018. Photo: VCG

Chinese rights lawyer Li Jinxing, who made his name fighting to overturn wrongful convictions, is now fighting an official decision to revoke his legal license due to “improper remarks on the internet.”

Li filed an appeal on Wednesday against a decision by Shandong province authorities to take away his license to practice law over his online criticism of China’s judiciary system.

The Shandong Provincial Department of Justice told Li on Monday that a number of his Weibo posts dating back to April 2017 violated certain articles of China’s Lawyer’s Law and lawyer practice guidelines. Revoking Li’s license would end his 16-year career as a criminal lawyer.

Li disputes the claims, telling Caixin his posts do not constitute an illegal act and that he would safeguard his professional rights and interests through all legal means.

This is not the first time Li has had trouble with his license. In 2016, the same justice department suspended his license for one year on the grounds he was “disturbing court order and interfering with the normal conduct of litigation activities.” Li refused to accept the punishment and attempted to have the decision reversed but failed.

According to the Lawyer’s Law, provincial judicial departments can revoke a lawyer’s license to practice if another violation occurs within two years after the expiration of a penalty suspension period.

Li is known in China for defending the rights activist Yang Maodong in 2016, and also for founding the “Innocence Project of China,” a group of lawyers that have worked to overturn wrongful convictions since 2013. He has helped to address multiple miscarriages of justice, such as that of Nie Shubin — who was executed in 1995 for a murder that another man confessed to committing in 2005 — and Chen Man, who was released in 2016 after serving 23 years in prison for a murder he did not commit.

According to Li’s screenshots of some of the posts, the content related to cases involving the suspension of a lawyer’s license in Hunan province; the death of a petitioner in Shandong province; and the shooting murder of a police officer in Hunan.

Li told the Shandong justice department that he had no intention of slandering the judicial system in his published posts and that the posts do not constitute an illegal act.

“All six of my Weibo posts are constructive statements. They are entirely within a lawyer’s rights granted by the Constitution,” Li told Caixin. “Lawyers handle cases according to law and publicly express their opinions in accordance with the law, and this safeguards the rights of the parties and the implementation of the law,” he said.

Li told Caixin that the Shandong justice department has interviewed him on several occasions and tried to persuade him to cancel his license of his own accord. Li refused.

Calls to the Shandong Provincial Department of Justice went unanswered on Wednesday.