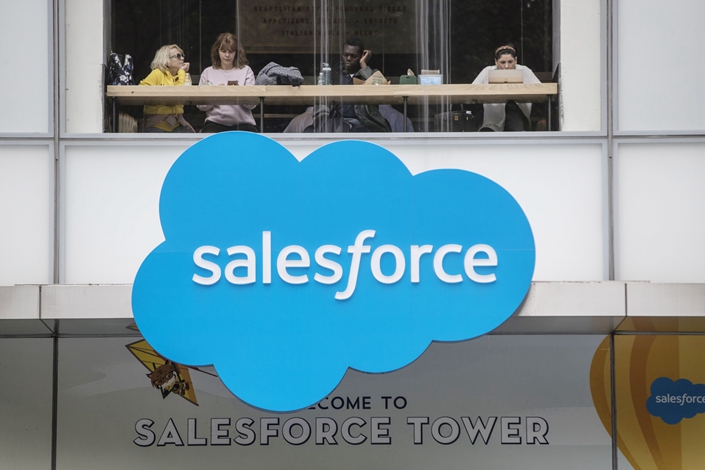 San Francisco-based Salesforce wants to more than double its annual revenue to as much as $28 billion by fiscal 2023. Photo: Bloomberg

Alibaba will sell Salesforce cloud-based software for clients’ sales, customer service and commerce needs on the Chinese mainland, Hong Kong, Macau and Taiwan, the companies said Wednesday in a statement.

San Francisco-based Salesforce, the top seller of software for managing customer relationships, wants to more than double its annual revenue to as much as $28 billion by fiscal 2023, but has recently seen slowing growth. Under co-Chief Executive Officers Marc Benioff and Keith Block, the company has expanded internationally, announcing investments and hiring throughout Europe and the Asia-Pacific region. Salesforce is entering China at a time when the U.S. government has made it harder for some American technology companies to sell products to Chinese customers, amid a flurry of tariffs on China-made goods.

Salesforce previously had a limited presence in China. Multinational customers were asking for support wherever they do business, according to the statement. Rival Oracle Corp. has reportedly been shedding workers in China, and the company’s co-founder, Larry Ellison, said in October it’s important for the U.S. tech industry and military to beat China.

Some investors have been concerned that Salesforce’s revenue growth rates are slipping, though the company continues to report quarterly sales increases of at least 20%. Salesforce has made splashy acquisitions in the past two years that will significantly contribute to revenue, including a $15.3 billion plan to buy data-analytics company Tableau Software Inc., which the company announced last month.

Alibaba’s $3 billion cloud services arm is fast becoming an important driver of its global expansion. The e-commerce giant widened its lead over Amazon.com Inc. and Microsoft Corp. in Asia’s cloud computing market in 2018, according to Gartner, which in turn helped it narrow its global gap with those two rivals.

Gartner estimates that Alibaba last year accounted for almost 20% of the market in Asia for two forms of infrastructure cloud services. Globally, Amazon leads with more than 30% to Alibaba’s 4.9%.