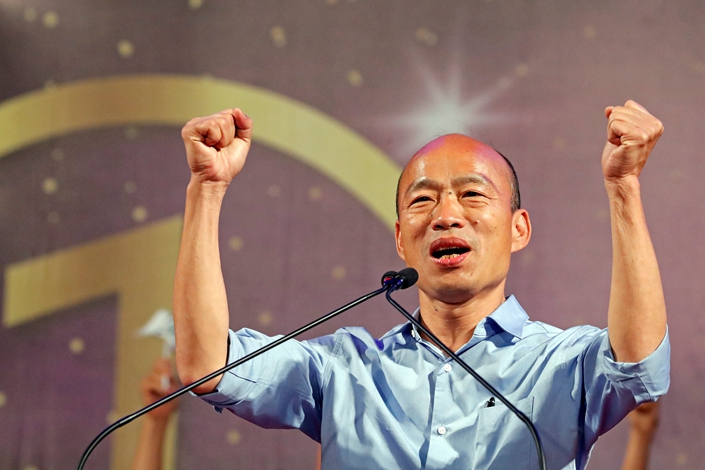 Han Kuo-yu has been nominated as the Kuomintang’s candidate in next year’s leadership elections in Taiwan. Photo: VCG

Kaohsiung mayor Han Kuo-yu was officially nominated to be the opposition candidate in next January’s Taiwan leadership elections, nearly a week after the staff of incumbent Tsai Ing-wen were caught in a cigarette-smuggling scandal, an incident likely to dent her popularity.

At the Kuomintang (KMT) congress on Sunday, Han became the official candidate to run against the Democratic Progressive Party’s (DPP) Tsai. Han was set to become the nominee after he won 27.7% of support in public opinion polling earlier this month. Now, candidates for both main parties have been confirmed.

In his acceptance speech at the congress, Han vowed to create an “economic miracle” and said that people should vote based on economic prosperity and stability in cross-strait relations rather than on party allegiance.

The election is set to be a difficult and grueling campaign, described by both candidates as a “fight” or a “battle.”

In his speech, Han also criticized many of Tsai’s policies and said that he would launch an active campaign to publicize to the outside world the “current situation of democratic retrogression and economic deterioration” under Tsai’s rule on the island.

Han did not reveal who his running mate would be, but said that it would be someone with a solid background in finance, economics and world affairs with an understanding of the science and technology industries to make up for his own shortcomings. Han burst onto the political stage in 2018 when he became the surprise winner of the mayoral election in Kaohsiung, which is normally a DPP stronghold in southern Taiwan.

Han has not resigned from this position, but as the pressure of campaign season heats up he may be asked to resign as mayor in order to avoid neglecting his mayoral duties. If he is elected to be Taiwan’s next leader, Kaohsiung will have to elect a new mayor.

According to surveys conducted by different institutions on the island, Tsai and Han are leading with Ko behind them. However, Ko’s candidacy may have a big impact on the election. According to a poll conducted by the Cross-Strait Policy Association, Tsai leads Han in a two-party race. However, in a hypothetical situation in which Ko also participates in the race, Tsai’s lead will be reduced to less than 3%.

Tsai’s popularity has dropped in recent months, and a scandal involving smuggled cigarettes likely will not help. On July 22, Tsai’s completed an overseas trip to three Caribbean countries as well as a transit stop in the United States. Upon her return, the Taiwan transit authorities discovered that some of Tsai’s security staff were smuggling as many as 9,800 duty-free cigarettes and were using the leadership’s plane to avoid security and customs inspections. The amount of taxes evaded was over NT$5.076 million ($163,170).

On Saturday, Tsai formally apologized to the people of the island and said that her government would work to prevent it from happening again. The KMT described the incident as “outright corruption” and Ko accused Tsai of playing it down, which could negatively impact Tsai’s popularity in the short-term.