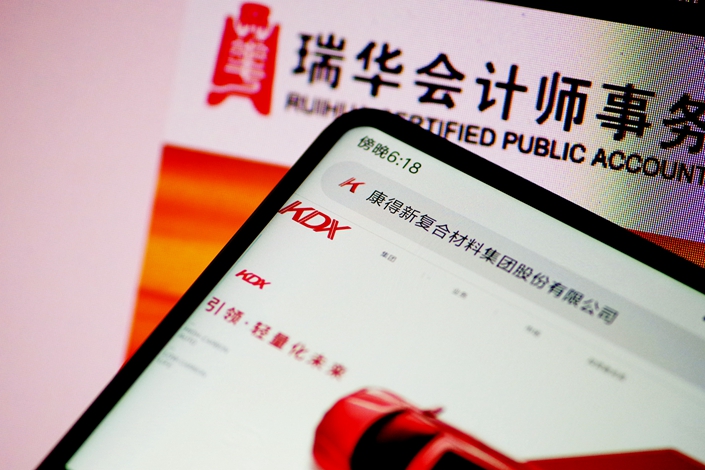 Because Ruihua remains under investigation, the regulator has suspended dozens of fundraising projects that it was working on for clients. Photo: IC Photo

Facing a regulatory investigation, one of China’s largest accounting firms has said that it did everything in its power to uncover financial problems during the audits of its scandal-plagued client, Shenzhen-listed Kangde Xin Composite Material Group Co. Ltd.

Ruihua Certified Public Accountants LLP said in a statement (link in Chinese) Sunday that it had independently verified all the crucial records between Kangde Xin and financial institutions, including all of the company’s bank accounts.

Ruihua’s statement came in response to an investigation by the China Securities Regulatory Commission (CSRC) that found Kangde Xin’s controlling shareholder had embezzled as much as 53.1 billion yuan ($7.72 billion) in company funds from 2014 to 2018 through its accounts at Bank of Beijing Co. Ltd., according to a Kangde Xin filing (link in Chinese) to the Shenzhen Stock Exchange released on July 5.

The finding came after Ruihua signed off on Kangde Xin’s financial statements from 2015 to 2017, giving them “standard unqualified opinions.” This year, however, the auditor gave Kangde Xin’s 2018 annual report a “disclaimer of opinion,” meaning that it could not confidently assess the company’s financial state.

In addition, the CSRC also accused (link in Chinese) the material manufacturer of fraudulently inflating its profits from 2015 to 2018 by 11.9 billion yuan.

Ruihua said in its Sunday statement that it had checked Kangde Xin’s sales, purchasing, and research and development expenditures during the audit. “(We) performed (all) the audit procedures that an audit firm can perform on the major risk items of the audited company,” Ruihua said at the statement.

A source familiar with Ruihua noted that external auditors can never uncover all of a company’s financial problems during a standard audit.

Because Ruihua remains under investigation, the regulator has suspended dozens of fundraising projects that it was working on for clients, including 33 initial public offerings on the Shanghai and Shenzhen stock exchanges as of Sunday, including four on the new tech board.

If the CSRC determined that Ruihua colluded with Kangde Xin to commit fraud, the accounting firm could end up banned from securities services businesses. Under Chinese law, the individual auditor responsible in such a case could also face criminal charges.

The CSRC began investigating Kangde Xin in January after it defaulted on 1.5 billion yuan in short-term commercial paper, a debt instrument. The default set off alarm bells because Kangde Xin’s financial statements showed that it still had about 15 billion yuan in cash and bank deposits at the end of September, raising concerns about financial fraud.

In May, police in East China’s Jiangsu province, where Kangde Xin is based, detained the company’s actual controller Zhong Yu on allegations of embezzlement. Zhong had stepped down as Kangde Xin’s chairman in February.

Kangde Xin is not the only Ruihua client currently under investigation by the CSRC. Drugmaker Furen Medicines Group Co. Ltd. missed paying 60 million yuan in dividends for 2018 even though it still had 1.8 billion yuan in cash on its balance sheet, according to its filings to the Shanghai Stock Exchange.