By Wang Juanjuan and Lin Jinbing 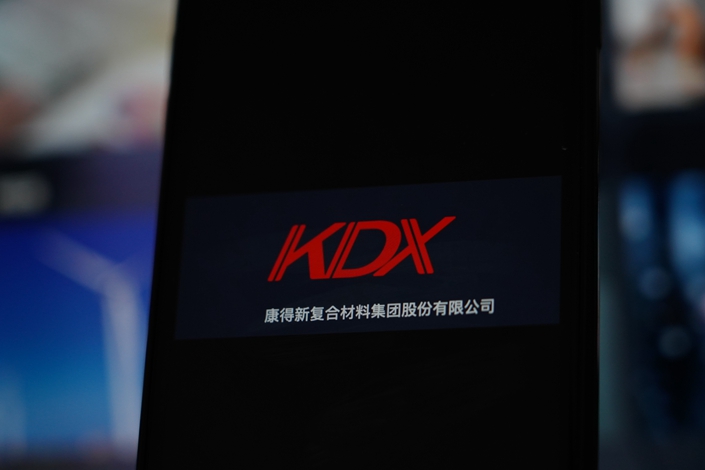 The auditor of scandal-ridden Kangde Xin Composite Material Group Co. Ltd. has been placed under investigation for failing to perform its duties, an official with China’s securities regulator said Monday, after an inquiry into the listed company uncovered a massive fraud.

Ruihua Certified Public Accountants, one of China’s largest accounting firms, is being probed by the China Securities Regulatory Commission (CSRC), an official from the inspection division said at a briefing. The firm has been Kangde Xin’s auditor since 2012, responsible for preparing the Shenzhen-listed company’s annual report and accounts.

The CSRC began an investigation into Kangde Xin in January when the laminating film manufacturer defaulted on its debts even though its financial statements showed it had 15 billion yuan in cash and bank deposits four months earlier. The company was found to have overstated its profits for the four years through 2018 by a total of 11.9 billion yuan ($1.73 billion), the commission said in a statement (link in Chinese) released on Friday summarizing its findings.

Although Ruihua in April gave a disclaimer of opinion for Kangde Xin’s 2018 annual report, it gave standard unqualified opinions for the company’s annual reports from 2015 to 2017. Over the four-year period, it was paid 8.4 million yuan by Kangde Xin for its auditing services.

“Generally speaking, when investigating fraud or information disclosure violations at listed companies, we also pay attention to the responsibilities of intermediary agencies,” the CSRC official, who was not identified, said at the briefing.

Under China’s Securities Law, the CSRC has the right to take action against intermediary firms, including audit companies, which fail to “diligently perform their duties” and issue documents with falsified information. It can order them to correct their wrongdoings, confiscate income received related to the offenses, and suspend or revoke their business licenses.

This isn’t the first time Ruihua has come under the regulatory spotlight. It was penalized in June 2016 for failing to assist a probe by the National Association of Financial Market Institutional Investors into Yunfeng Group Co. Ltd., an audit client, which defaulted on 2 billion yuan of bonds earlier that year. Ruihua was also subject to two further punishments, in December 2016 and January 2017, for fabricating information in its audit reports and the CSRC temporarily banned it from taking on new securities-related business.

Kangde Xin published the CSRC’s findings in full in a stock market filing (link in Chinese) on Friday, which revealed that the company had failed to disclose in its annual reports that its controlling shareholder had embezzled its funds and that it had provided guarantees for the shareholder’s fundraising activities. It also failed to truthfully disclose how it used the funds it raised.

In January, the company’s shares were put under Special Treatment status, a label given to firms in financial distress or facing regulatory problems. The filing noted the shares are now likely to be delisted as the investigation found the company was unprofitable for four years through 2018.

“If the fraud is finally confirmed, we will make a decision to delist (the company),” Cao Yong, a deputy director of the CSRC department that oversees listed companies, said at the briefing.

The commission plans to fine Kangde Xin 600,000 yuan and impose financial penalties totalling 2.67 million yuan on 28 of its employees, the filing said. Zhong Yu, the actual controller of the company, will be fined 900,000 yuan and banned from the securities market for life.

Zhong, who stepped down as chairman in February, is already in trouble with the police. In May, the Public Security Bureau of Zhangjiagang city in the eastern province of Jiangsu, where the company is based, said he had been put under “criminal coercive measures,” without giving further details. Criminal coercive measures can include things like summons by force, residential surveillance, detention or arrest.