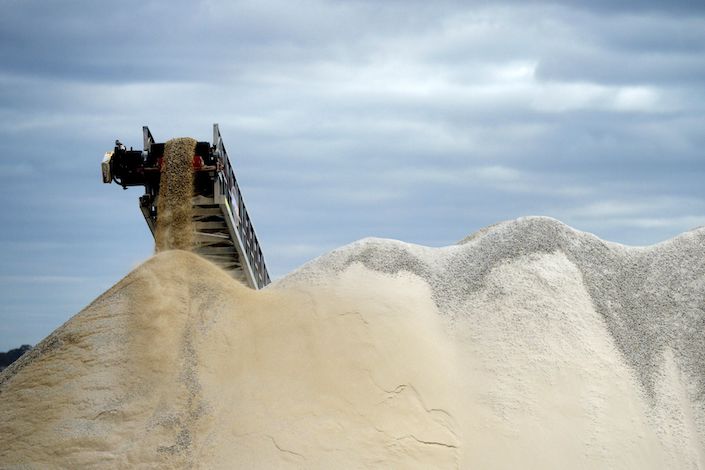 Lithium ore falls from a chute onto a stockpile at the Bald Hill lithium mine outside Widgiemooltha, Australia, on Monday, Aug. 6, 2018.

(Bloomberg) — Lithium miners are bulking up for a booming future when electric cars go mainstream. But speed bumps loom, with prices tumbling on a burst of new production and slowing demand growth in China.

Between mid-2015 and mid-2018, prices for lithium, the soft, silvery-white metal crucial for rechargeable batteries, almost tripled as the world’s fleet of electric vehicles (EVs) hit the 5 million mark and the auto industry began to fret over the supply of raw materials.

That spurred the opening of six lithium mines in Australia since 2017 as companies raced to gain from an evolving technology. But while the EV boom is coming, it isn’t here yet. Sales growth is slowing in China, the top market, and the drive to fill the battery supply chain has cooled. The result: a 30% price plunge for lithium that’s spurring concern over where the bottom may lie.

“The latest EV data did reveal slowing growth, inferring that on top of excess supply, demand is now a problem,” Vivienne Lloyd and other analysts at Macquarie Capital Ltd. wrote in a report this month. “The key interest for investors should be who is likely to survive.”

Mineral Resources Ltd. declined 2.6% after it confirmed that the price for material from its Mount Marion mine will fall this quarter.

In the first quarter of 2019, sales of electric vehicles in China, the largest EV market, grew by about 90% compared with a year earlier. While that sounds impressive, it’s half the growth between 2017 and 2018, according to Nikolas Soulopoulos at BloombergNEF in London.

Meanwhile, lithium output in Australia, the world’s leading producer, is expected to rise about 23% over the next two years. Last month, the mining minister for No. 2 Chile, Baldo Prokurica, said the current administration was seeking to double production within four years.

Lithium producers face other pricing hurdles as well, including a slowdown in the world’s ability to convert mined ore into lithium materials. Some converters in China reported delayed expansion due to overly aggressive project time lines, extended periods to commission their facilities and tightened credit, according to a July report by Orocobre Ltd.

In response to the delays, Perth-based Pilbara said in June that it planned to temporarily slow the pace of production.

Even though the long-term demand outlook still appears strong, some producers are lowering their earnings forecasts for the short term. Earlier this year, Belgium-based Umicore SA, the world’s largest lithium ion cathode maker, reduced its earnings guidance through the end of 2019, citing weaker demand and the shutdown of energy storage systems in South Korea.

By 2025, the market for mined lithium raw material may be worth $20 billion, compared with $43 billion for refined products and $424 billion for battery cells, according to a base-case scenario outlined in a 2018 study published by the Australia-based Association of Mining and Exploration Companies.

By 2030, the supply of lithium-ion batteries will need to increase by more than 10-fold, BloombergNEF forecasts, with electric vehicles accounting for more than 70% of demand.

In the meantime, the lithium bears are in control.

Morgan Stanley forecast earlier this month that lithium carbonate prices from South America would fall below $10,000 a ton. Different forms of lithium produced in different regions will continue declining and converge between $7,000 and $8,100 a ton by 2025, according to analysts led by Javier Martinez de Olcoz.

Not all lithium is equal either. Miners produce lithium with specific chemical properties, catering to the needs of each buyer. Negotiations to close contracts are confidential and typically take months.

“As the EV industry evolves, battery requirements are changing to address greater safety needs, range specifications, and energy density,” Martinez de Olcoz wrote in a report. The difference, he said, "has raised questions about the ability of lithium producers to keep up with the fast-changing demand profile.”

Lithium stocks will remain volatile, but producers that can adapt faster to the changing needs of their customers are likely to win in the race to dominate the market, de Olcoz said.