By Lin Yunshi and Ren Qiuyu 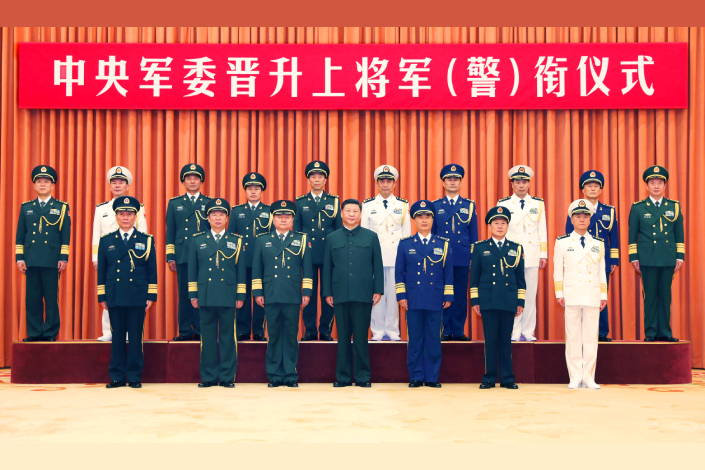 Ten People’s Liberation Army (PLA) officers were made generals — the highest rank for active service officers — at a ceremony attended by President Xi Jinping on Wednesday.

Six of the 10 newly promoted soldiers have been made generals earlier in their careers than is normally the case.

Usually, soldiers must serve as a lieutenant general for four years or spend two in a Theater Command posting — depending on the total length of their service and their experience.

However Li Shangfu, Wu Shezhou, Zhu Shengling, Shen Jinglong, Zheng He, and An Zhaoqing have been promoted after less than the standard four years. It appears they have been fast-tracked to join the upper echelons of the military elite.

The new generals include one officer with experience in China’s space program, the political commissar of the military region which contains the Tibet and Xinjiang Uygur autonomous regions and the commander of the region which includes the South China Sea.

All 10 of the new generals are members of the Central Committee of the 19th National Congress of the Communist Party of China, one of the party’s top political bodies. This was the second such ceremony since the congress in October 2017.

Li, 61, served as the commander of the Xichang Satellite Launch Center for 10 years and oversaw the launches of China’s lunar exploration probes. In September 2013, he was appointed chief of staff of the PLA General Armaments Department, ending his 31-year stint at the launch center.

In 2016, he served as deputy commander of the PLA Strategic Support Force, a then-newly established force to strengthen China’s high-tech military capabilities in cyberspace and space, among other spheres, and was promoted to lieutenant general. Just three years later, he has been promoted to general.

In 2017 he was made head of the CMC’s Equipment Development Department, which replaced the PLA General Armaments Department and is responsible for overseeing and improving military technology.

Li’s father, Li Shaozhu, was a Red Army veteran and commander of the PLA Railway Corps who fought in the Korean War and won a Medal of Merit in 1988.

In 2016, China’s seven military regions were reorganized into five theater commands, each led by a commander and a political commissar, as part of a series of broad military reforms launched in 2015.

Yuan Yubai, 63, is the only naval vice admiral in charge of a theater command — the Southern Theater includes the South China Sea. He moved quickly up the ladder after the 18th Party Congress in 2012, getting promoted to command the North Sea Fleet in 2014 after one year as deputy commander. In January 2017, he succeeded General Wang Jiaocheng as commander of the Southern Theater.

That a sailor heads the Southern Theater highlights the strategic importance of the South China Sea. He is one of the youngest of the 10 officers that lead the five theaters.

Wu Shezhou, 63, is the political commissar of the Western Theater Command, which includes the Xinjiang Uygur and Tibet autonomous regions. He was promoted to lieutenant general in 2017, shortly after his promotion to political commissar.

Zhu Shengling, 61, only took up his posting as the political commissar of the PLA Central Theater Command in June after the retirement of his predecessor. He enlisted in the army at the age of 19 and has since served in Nanjing, capital of Jiangsu province, and Fujian province. Since the 18th congress, Zhu has changed position almost every year. In August 2016, he was promoted to lieutenant general and in January 2017 became the political commissar of the People’s Armed Police (PAP), the paramilitary police force. When Zhu moved to the Central Theater Command, he was replaced by An Zhaoqing.

Shen, 62, served as the dean of the Naval Command Academy from 2011 to 2014 and was then appointed as the commander of the PLA Navy South Sea Fleet. He was promoted to vice admiral (the Navy’s lieutenant general equivalent) in 2016. When he became commander of the navy in January 2017, he was the first to have been promoted directly from fleet commander. During massive naval exercises in April 2018, Shen and Qin appeared in state media saluting and reporting to President Xi.

Qin, 62, has spent much of his military career in political and Communist Party affairs, becoming the director of the CMC’s General Office in 2012. The military reforms launched in 2015 saw the PLA’s four general departments abolished and folded into 15 departments under the CMC. Qin continued to serve as the director of the General Office and also served as chief of the CMC’s Reform and Organization Office. In September 2017, Qin became the Navy’s political commissar.

Ding, 61, has served in the air force for many years. Like the others, he has held a number of positions since the 18th Party Congress, and became the commander of the air force in August 2017. He was a deputy to the National People’s Congress, the country’s top legislature, for three consecutive years.

Zheng, 60, is the first president of the National Defense University since the military reform and restructuring was completed in 2017. It is his fifth posting since the 18th Party Congress, posts that include deputy commander of the Chengdu Military Region and president of the former Academy of Military Science.

Since the 18th Party Congress, the CMC has promoted a total of 39 generals in eight promotion ceremonies, with 10 generals promoted in 2015 and 2019. Almost all of the 39 are members of the 18th or 19th Central Committees, with only two exceptions. Many of those promoted before 2015 are or will soon be reaching the usual retirement age of 65.

According to Caixin’s statistics, after the latest promotions the number of generals in active service will reach 26.